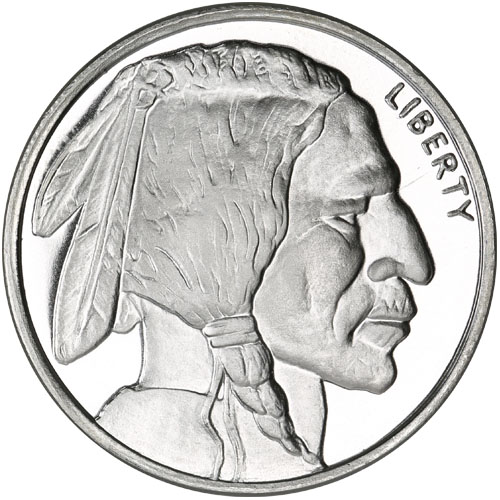 One of the greatest American coin designs of the 20th century was the Buffalo Nickel. Created in 1913 by James Earle Fraser, this iconic design featured on the nation’s five-cent piece until 1938 and is remembered as one of the first major circulation coins in the US to offer design themes based on the lifestyle and culture of North America’s indigenous tribes. Right now, 1 oz Silver GSM Buffalo Rounds are available to purchase online at Silver.com.

Each of the 1 oz Silver GSM Buffalo Rounds in this product listing is available to you in brand-new condition from the mint. The rounds are housed individually within protective flips or in tubes for orders up to 20 rounds.

Fraser was the son of a railroad engineer who was born and raised in Winona, Minnesota. He would often travel with his father throughout Wisconsin, Minnesota, and the Dakotas and take in the sights of the American Plains firsthand. The experiences of his youth shaped the works of art he would create for public entities and private individuals going forward.

The administration of President William Howard Taft commissioned Fraser to complete design work on a new image for the circulation nickel. Much of the nation’s coinage at this point in history hadn’t been redesigned since 1892 when US Mint Chief Engraver Charles E. Barber created most of the designs himself.

On the obverse of 1 oz Silver GSM Buffalo Rounds is the effigy of a Native American tribal figure. This right-profile portrait captures an individual with braids and feathers woven into his hair in the back. The word “Liberty” is engraved to the right of the design field. Fraser reportedly used the facial features of three different real-world indigenous leaders of the 20th century to create this portrait.

The reverse of Silver GSM Buffalo Rounds includes the image of an American bison. Better known in America as the buffalo, this massive creature is actually based on a real-life beast. Fraser used Black Diamond, a resident bison at the Central Park Zoo, as his inspiration for the design. Engravings on this side include “Golden State Mint” above and “1 Troy oz .999 Silver” below.

If you have any questions about these silver rounds, please contact Silver.com. You can call us at 888-989-7223, chat with us live online, or email us directly.