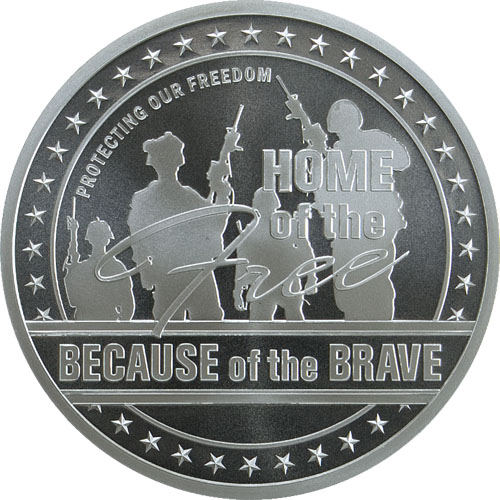 From the first shots fired at Lexington and Concord to the signing of the Declaration of Independence and the Siege of Yorktown, America has long remembered that there is a cost that comes with freedom. In order to remain free, America must remain vigilant and stand ready to defend its liberties at all costs. You can remember the price of freedom with a new silver round release from the Golden State Mint. Right now, 1 oz Silver GSM Home of the Free Rounds are available to purchase online at Silver.com.

Each 1 oz Silver GSM Home of the Free Round offered in this listing comes to you with an individual flip or an acrylic tube if you purchase multiples of 20. All of the silver rounds are available in Brilliant Uncirculated condition courtesy of the Golden State Mint, a private US mint based in Central Florida.

When America’s founders put their names on the Declaration of Independence, they risked life, limb, and fortune to establish a nation that offered freedoms and protections not guaranteed in writing anywhere else in the world. With a new form of representative government, these individuals hoped to create a more perfect union of people. Over more than 225 years of history, freedom and liberty have been challenged. At each step along the way, Americans have set aside differences to unite against a common threat, turning to the members of the military to act as the tip of the spear in defeating tyranny.

The obverse of the Silver GSM Home of the Free Round features members of the modern US Military. These warriors are captured only as silhouettes. Each one stands ready to step into the crucible of fire to defend the liberty and freedoms of their countrymen wherever the nation calls them to go. The design rim around the edge of the field includes numerous stars, and the design field bears the popular phrase “Home of the Free Because of the Brave.”

On the reverse side of 1 oz Silver Home of the Free Rounds is Old Glory. Also known as the Stars and Stripes, the US flag has changed several times since its first creation during the Revolutionary War, but its core elements remain the same. The blue field has changed from that first flat with a ring of 13 white stars to include a field of 50 white stars, one for each US state. The red-and-white stripes, and enduring symbol of the original colonies, remain on the flag to this day.

If you have any questions about these silver rounds, please don’t hesitate to ask. Silver.com customer service is available at 888-989-7223, online through our live chat, and using our email address.