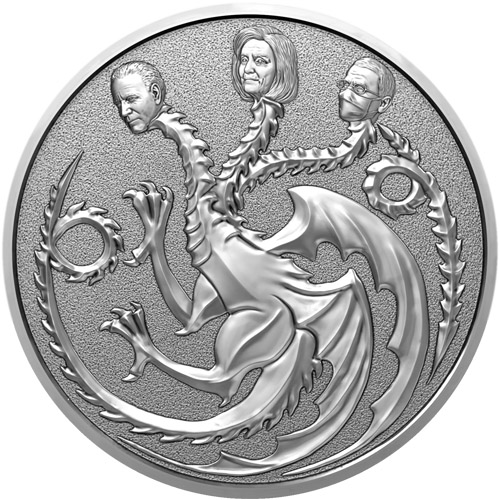 One of the greatest threats to the health of the American economy and the financial stability of the American family is inflation. The threat of inflation can hamper the growth of the economy and raise prices for Americans trying to buy everyday goods, from food and toiletries to the coast of a night out on the town with friends. Now, 1 oz Silver Inflation is Coming Series Unleash the Beast Rounds are available to you for purchase online from Silver.com.

In recent history, the US has experienced some of the lowest year-over-year inflation rates ever recorded. The average rate in 2010 was 1.6%, and by March 2020, it had risen a minuscule amount to 1.8%. However, with Democrats now in charge and looking to spend trillions of dollars on social programs, fears of drastic increases in inflation are returning.

The obverse of 1 oz Silver Inflation is Coming Series Unleash the Beast Rounds comes with a depiction of a three-headed beast. This dragon-like beast features the heads of those in power who control spending and over-spending in the United States. With spending off the rails, it is possible that massive spending packages that could drive up inflation may pass through Congress and be enacted into law.

On the reverse of Silver Inflation is Coming Series Unleash the Beast Rounds is an image of this warning. At the center of the design is the inscription INFLATION IS COMING. Other inscriptions on this side include the identifying hallmarks of the round and the statement PAYING DEBTS WITH THE PRINTING PRESS.

These 1 oz Silver Inflation is Coming Unleash the Beast Rounds are available all-new from the mint. The rounds are packaged in plastic flips or acrylic tubes of 20 rounds.

Silver.com customer service is available at 888-989-7223 to answer your questions when you buy silver. Our team is also available online using our live chat and email address features.