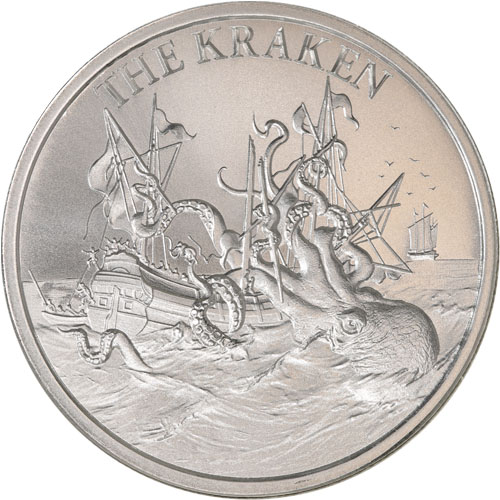 The world of mythical beasts contains all manner of creatures that run the gamut from tame and harmless to outright destructive in nature. The Kraken falls in the latter group in historical tales from the ancient world. Beginning in the 13th century, Scandinavian sailors traversing the North Atlantic featured the Kraken as a cephalopod-like beast capable of tearing apart entire ships and decimating the crew. The 1 oz Silver Intaglio Mint The Kraken Round captures this beast in action and is available to you for purchase today at Silver.com.

Accounts of the Kraken terrorizing sailors date back to the 13th century and aren’t as outrageous as they might seem on the surface. After all, the giant squid species roams the waters of the North Atlantic Ocean and is known to grow up to 40 or 50 feet in length. Add to that the temperamental nature of the giant squid and it’s not ridiculous.

However, accounts of the Kraken suggest the beast is much larger and would purposely attack merchant ships and other sailing vessels as though it were a sport. Today, the Kraken’s lore exists predominantly within the fields of mythology and cryptozoology. The latter is a form of pseudoscience that seeks to prove that entities such as the bigfoot, chupacabra, and Kraken really exist.

On the obverse of 1 oz Silver Intaglio Mint The Kraken Rounds is the image of one of these mythical creatures engulfing a boat with its tentacles. As a group of sailors clamors overboard into a raft hoping to get away, the entirety of the Kraken grabs the merchant ship and begins to pull it down to the depths. This design is reminiscent of an 1810 design from Pierre Denys de Montfort that depicted a Kraken attacking a merchant ship as sailors attempted an escape in a wooden raft.

The reverse side of Silver Intaglio Mint The Kraken Rounds features the Intaglio Mint logo and the name of the mint. The logo reflects the look of a Romanesque column in the shape of an “I,” with an outer edge design that includes the weight, purity, and metal content of the silver round.

These 1 oz Silver Intaglio Mint The Kraken Rounds ship to you with a protective packaging to house the round and are part of the mint’s larger Cryptozoology Collection of rounds.

We encourage Silver.com customers to call us at 888-989-7223 with any questions. You can also connect with us on the web using our live chat feature and email address.