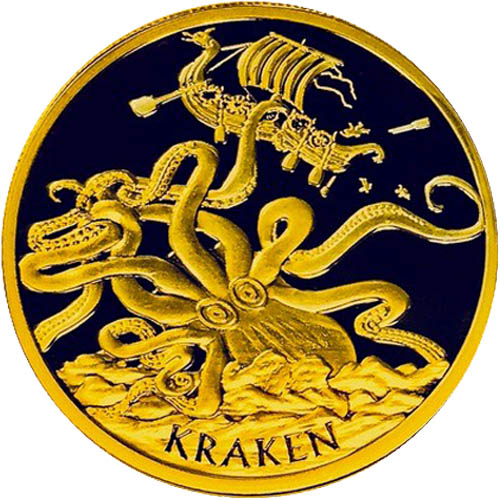 Few creatures of the ancient world were as feared as the Kraken. Rumored to be up to 50 feet in total length and a ruthless destroyer of ships, the Kraken was feared by sailors and its location marked on navigational maps from the North Sea around Scandinavia to the Caribbean Sea and the South Pacific Ocean. Today, the 1 oz Silver Kraken Round with a gold-plated finish is available to you online at Silver.com.

The Kraken silver round in this product listing is a product of the designers at Anonymous Mint and is produced by the North American Mint. This Kraken design has previously appeared on Anonymous Mint BU and antique products, and now arrives with a third version that is sure to impress collectors.

All 1 oz Silver Kraken Rounds in this product listing are available with a protective capsule to house the individual specimens. These rounds are proof-like products with frosted design elements overlaying mirrored fields for visual contrast. That contrast is further enhanced by the application of a gold-plated layer to select design elements, including the Kraken, that immediately draw the eye to the primary design.

The obverse side of 1 oz Silver Kraken Rounds includes the depiction of a Kraken attacking a ship. The beast has fully emerged from the depths of the ocean to use its tentacles to launch a blitz attack on an unsuspecting, helpless Viking longship. The vessel here has been split in half across its hull and raised high up out of the water. As the Kraken continues its attack, a handful of sailors have jumped, or perhaps fallen, from the ship and are dropping down to the water.

On the reverse face of 1 oz Silver Kraken Rounds, you will notice the Anonymous Mint logo. The logo for the Anonymous Mint is inspired by the heraldic eagle of the United States, but uses an owl instead of an eagle as a symbol of wisdom. The owl is facing front with three arrows in its talons and a crown above its head that has the Anonymous Mint’s “AM” initials inscribed on it. At the top of the design field are 13 stars and the mint name is inscribed at the bottom.

Please feel free to reach out to Silver.com if you have any questions. You can call us at 888-989-7223, chat with us live online, or email us directly.