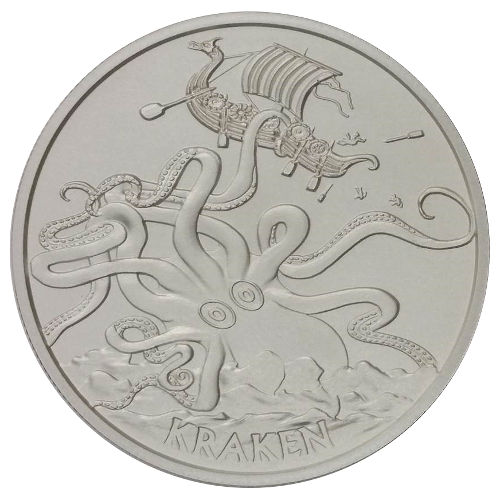 The Vikings were among the first seafaring people to explore the world and fearlessly cross oceans in search of new plunder and new shores. As the Vikings traveled across oceans, tales of fearsome beasts lurking in the depths of the ocean emerged. The most important was the story of the Kraken, a giant cephlapod capable of grabbing entire ships and sinking them along with their crew. Right now, the 1 oz Silver Kraken Round is available on Silver.com.

Each of the 1 oz Silver Kraken Rounds in this Silver.com product listing has a Brilliant Uncirculated grade. Rounds with a BU grade exhibit no signs of wear and tear, but also display minor flaws such as breaks in the luster, spotted surfaces, and contact marks from the striking process.

Viking sailors were the first to record interactions with the mythical beast that came to be known as the Kraken. Unlike the common octopus or squid, the Kraken was reportedly the size of ships or even larger. Also different from other cephlapods, the Kraken was aggressive and would actively attack ships and sailors.

The obverse face of the coin, as designed by Lindquist, features the image of a Kraken as it attacks a longboat carrying Viking sailors. The Kraken is shown hoisting the ship out of the water and snapping it in half as helpless sailors fall into the ocean. The only engraving on this side reads “Kraken.”

On the reverse you’ll find the amusing Anonymous Mint logo, that of an owl with its wings spread and arrows in its talons. Similar to the heraldic eagle design used by the US Mint, the owl is forward-facing and has 13 stars over its head as a nod to the original American Colonies.

Anonymous Mint created these Silver Kraken Rounds as a continuation of its popular pirate-themed rounds. These are distributed in conjunction with the North American Mint, and available only while supplies last.

Please feel free to contact Silver.com with any questions you have about this silver round. Our associates are available on the phone at 888-989-7223, online using our live web chat service, or via our email feature.