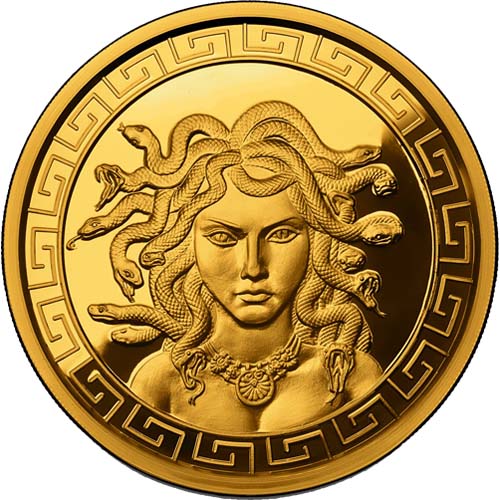 Medusa silver rounds were introduced by the Anonymous Mint in recent years with a shocking effigy of the famed Gorgon on the obverse of the rounds. Available only in 1 oz silver, the rounds have previously been issued as Brilliant Uncirculated, Proof, and Antique rounds. Now, there is a gold-plated version that captures the designs like never before. Right now, 1 oz Silver Medusa Rounds with a gold-plated field are available to purchase online at Silver.com.

Each 1 oz Silver Medusa Round offered here is a stunning gold-plated version of the proof-like round from the Anonymous Mint. The rounds are available with protective plastic capsules to house each piece and come with a complete plating of 24-karat gold across both the obverse and reverse design elements. Each round is a proof-like specimen that bears slight frosting on the designs and mirror-like background fields.

Medusa is one of the three sisters known as Gorgons. The Gorgons, or Gorgo, were monstrous female figures that are depicted with slightly different histories in Greek and Roman mythology. Both Roman and Greek mythology consider the sisters to be the daughters of Phorcys and his sister Ceto. While both mythologies also speak of Medusa finally being beheaded by a demi-god, only Roman mythology refers to Medusa as having previously been a beautiful maiden who was seduced in the temple of Athena by Poseidon, with the goddess exacting her revenge on Medusa by stripping her of her human beauty and turning her into a hideous beast.

On the obverse of the 1 oz Medusa Round, you will find a front-facing effigy of the infamous mythological Gorgon. Medusa is said to have possessed sickly, green skin with the lower body of a snake or other serpent-like beast, the torso and head of a woman, but hair made of snakes. With one glance into her eyes, any man would turn to stone instantly. It is said that Perseus was able to defeat her by deflecting her gaze in a shield’s reflection and thereby get close enough to decapitate her.

The reverse field of Silver Medusa Rounds from the Anonymous Mint features the logo of the mint. Here, a wise owl is shown in front-facing relief as its talons clutch a set of three arrows. The owl is crowned with a decorative piece that includes the initials of the mint, while a cluster of 13 stars is found overhead.

If you have any questions, Silver.com customer service is available to assist you. Our customer service team can field your inquiries on the phone at 888-989-7223, online using our live chat, and via our email address.