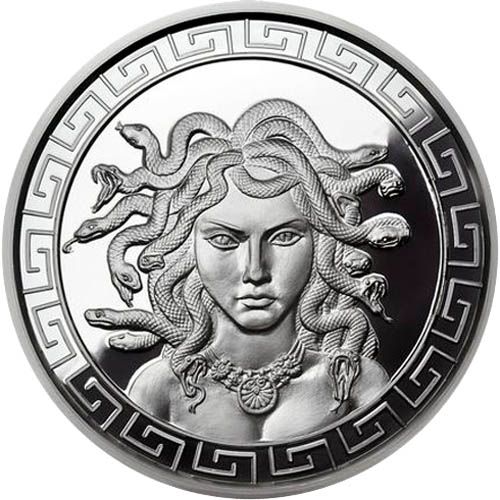 Once a beautiful, golden-haired maiden, Medusa was transformed into the stuff of nightmares by the goddess Athena for betraying her values. The story of Medusa is one of the most famous from Greek mythology and has been depicted in countless different works of art and precious metal designs in the millennia since it was first recorded. Right now, 1 oz Silver Medusa Rounds are available to purchase online at Silver.com.

Each of the 1 oz Silver Medusa Rounds available to you here come in brand-new condition. The silver rounds in this listing come individually packaged inside of protective plastic flips from the Anonymous Mint. This Medusa design has already featured on countless versions of silver rounds from Anonymous Mint and returns on this release.

The Anonymous Mint has featured this same design and border element from the obverse of this round on proof-like and antique rounds. Each of the previous releases, both antique and proof-like, came with 1 oz silver and 5 oz silver round options. Now, Medusa returns on this beautiful silver round release.

Medusa is shown on the obverse side of the 1 oz Silver Medusa Round. This portrait captures an angry Medusa glaring forward at you the viewer. Her head of snakes of wriggling and ready to turn all those who look her in the eyes to stone. Medusa was one of the most popular figures from Greek mythology.

Once a beautiful maiden with golden hair and fair skin, Medusa was one of the three gorgons and a priestess of Athena. As a priestess of the goddess, she had to live a life of celibacy but fell short of that. After being seduced by Poseidon and becoming pregnant with the sea god’s child, Medusa suffered the wrath of Athena and was transformed from a beautiful maiden to a hideous beast whose gaze turned men to stone.

The Anonymous Mint logo is featured on the reverse face of the Silver Medusa Rounds. In this design, the logo bears a depiction of an owl in front-facing relief with a crown on the bird’s head. The crown on the bird’s head bears the initials of the mint, “A.M.” There are thirteen stars over the owl’s head as well arranged in a row of six, a row of four, and a row of three.

If you have any questions about 1 oz Silver Medusa Rounds, please don’t hesitate to reach out to Silver.com. You can call us on the phone at 888-989-7223, chat with us live online, or email us directly.