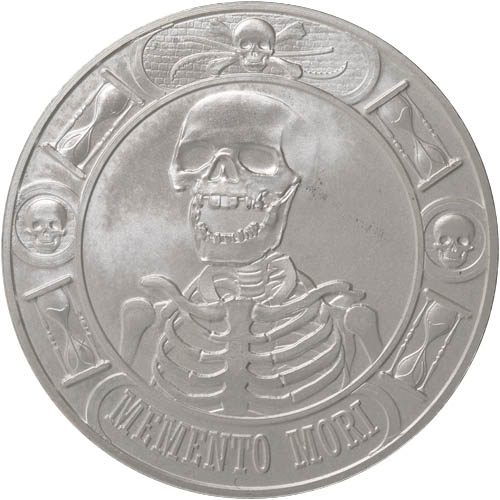 The phrase memento mori translates roughly as “remember that you will die.” Silver rounds with images of death and skeletons remind us all that life is short and we will all end up in the same place at some point in time. Memento mori rose to greater prominence and use along with the growth of Christianity in the 2nd century. Today, 1 oz Silver Memento Mori Rounds are available to you online at Silver.com.

A Christian writer in the 2nd century by the name of Tertullian claimed to have overheard the phrase the triumphal processions of Roman generals returning from victorious battles. It was said that an individual servant or slave would hold a crown over the general’s head from behind and whisper a phrase that, in effect, reminded the general that he was only a man who would in time die as well.

All 1 oz Silver Memento Mori Rounds are available to you through this product listing in Brilliant Uncirculated condition. The rounds are housed individually inside of protective plastic flips. The series was designed by lead coin creator Julie Lindquist at the Anonymous Mint and features this BU specimen alongside an antique, low-mintage option.

On the obverse of the 1 oz Silver Memento Mori Round is a depiction of a skeletal figure known as the Last Laugh. The laughing skeleton figure was popular in European funeral art from the Medieval Age to the Victorian Era. Design elements around the rim of the round include skull at the top with reaper blades, two skulls to the sides, and four hourglasses marking the passage of the sands of time.

The reverse face of 1 oz Silver Memento Mori Rounds includes the owl logo of the Anonymous Mint. Inspired by the heraldic eagle of the United States, the Anonymous Mint owl wears a crown on its head with the mint initials, arrows in its talons, and 13 stars above the owl logo. The name of the mint is featured below the owl with the weight, purity, and metal content of the rounds.

The Anonymous Mint is a private coin design facility that creates a variety of impressive, low-mintage silver round collections.

Please don’t hesitate to reach out to Silver.com with your questions. You can call us on the phone at 888-989-7223, chat with us live online, or simply send us an email.