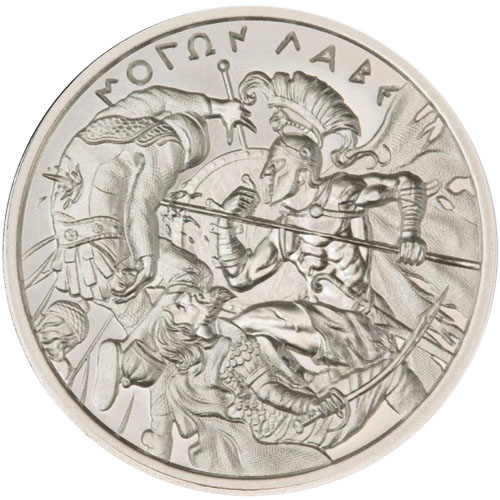 In the continuing Silver Molon Labe Series, the Intaglio Mint offers one new design after another for those who buy silver in the collection. Each new release comes with a different depiction of the events that took place during the Battle of Thermopylae in 480 BC. The three-day battle is famed for the sacrifice of King Leonidas and his 300 Spartan warriors in delaying the massive Persian Army. Now, 1 oz Silver Molon Labe Rounds are available to you for purchase online at Silver.com.

When the Persian Army invaded Greece in 480 BC, the move was in retaliation for its surprising defeat at the hands of the Greek army a decade earlier. This time, Xerxes brought an army with an estimated strength of 150,000 men. The squabbling city-states of Greece were not a singular empire and need time to amass forces from the various regions.

King Leonidas and the Spartan Army were viewed as the best fighters in Greece, but his forces were few. With some 7,000 Greeks, Leonidas and 300 of his best Spartans set out for Thermopylae with the expressed purpose of trying to delay Persia’s advance for as long as possible. In the end, his men would give their lives to buy time for the rest of Greece.

On the obverse of 1 oz Silver Molon Labe Rounds, you will find a new depiction of Spartan warriors in the midst of the battle with Persia. This design shows a Spartan warrior rushing forward to drive his spear through the chest of a Persian as he delivers a shot to the face with his knee on another Persian.

The reverse side of Silver Molon Labe Rounds features an image of the Intaglio Mint logo. The logo consists of a column in the shape of an I with the name and establishment date of the mint. The background field has a swirling field of radial lines and the identifying hallmarks are inscribed around the rim of the round.

These 1 oz Silver Molon Labe Rounds are available to you with the seventh design of the series. The rounds will ship individually inside of plastic flips and by multiples of 20 silver rounds in tubes.