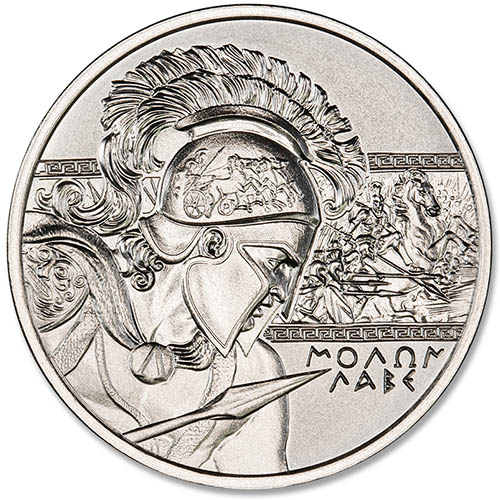 One of history’s most famous battles took place at Thermopylae and the so-called Gates of Hell. Sparta’s King Leonidas I stood in defiance of a Persian army numbering in the thousands with just 300 men of his own. Uttering one of the most famous lines of defiance in human history, when asked to surrender he challenged the Persians to “come and take them” in reference to his soldiers’ weapons. Today, 1 oz Silver Molon Labe Rounds are available to you online at Silver.com.

As the Persian armies advanced on Greece, the only line of the defense for the city-states of Greece was the kingdom of Sparta. The Spartan army was widely feared in the ancient world for its fierce dedication to raising young boys from birth to be skilled warriors. With an army of just 300 soldiers, King Leonidas marched to Thermopylae to hold off the Persians.

On the obverse side of the 1 oz Silver Molon Labe Round is the image of a solitary Spartan soldier in his full battle regalia with a spear ready to give his life to hold back the Persians. The phrase “Molon Labe” is found on this face of the round. The Spartans did their best, but could only hold back the Persians for three days, inflicting serious losses on the armies of Persia in the process.

Use of the phrase “Molon Labe” is popular to this day in military and patriotic circles. The United States Special Operations Command Central uses the phrase as its motto, and during the Texas Revolution the men of Texas told the Mexican Army upon its request to retake a canon that they could “come and take it.”

The reverse side of the 1 oz Silver Molon Labe Round features the logo of the Intaglio Mint. A beautiful Romanesque column in the shape of an “I,” the mint logo is immediately surrounded by the words “Intaglio Mint” and is set on a radial burst background field. Engravings of “One Troy Ounce” and “.999 Fine Silver” surround the outer edge with four bullet points on each side. The rounds are available in protective plastic flips or in tubes of 10 or 20 rounds.

Please feel free to reach out to Silver.com if you have questions. You can call our customer service team at 888-989-7223, chat with us live online, or email us directly.