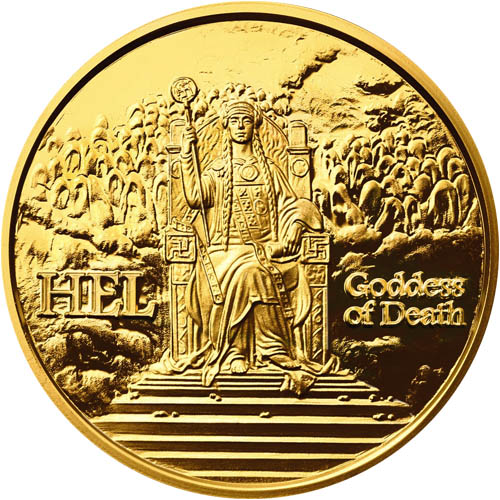 Each one of the 1 oz Silver Norse God Series Hel Rounds in this listing at Silver.com comes to you with an individual plastic capsule. This release is one of the most visually stunning of the broader Norse God Series. There is a thin application of 24-karat gold visible on select design elements for the purpose of offering immediate visual contrast between the design elements and the background field of the rounds.

The Norse God Series consists of five designs in all, with three gods and two goddesses from Norse mythology featured. The new release options have the same order as the previous collections. Odin, the All-Father God, comes first and is followed once again by Thor, Hel, Freya, and Lokie. Hel and Freya represent the only goddesses present in the series.

The obverse side of 1 oz Silver Norse God Series Hel Rounds includes a depiction of the Goddess of Death. Like other figures in this collection, Hel is shown seated upon her throne as she is the rule of a particular realm in Norse mythology. While Odin rules over Asgard, the home of the gods, he has cast Hel down into the lowest of places in the world.

Hel is sentenced by Odin to be the Goddess of Death and the ruler of Helheim. From here, she rules the nine worlds of the greater Underworld. Into her kingdom, she receives all those who die of sickness and old age. Eternity is not to be a pleasant one here though as famine, starvation, and the sickbed away. Hel does nothing to make her guests comfortable.

On the reverse face of Silver Norse God Series Hel Rounds, you will find a Valkyrie. These warrior maidens are hand-selected by Odin to be the Chooser of the Slain. Riding above the battles of mankind in the sky, the Valkyrie make life-and-death choices for those fighting below.

If you have any questions, Silver.com customer service is here to assist. You can call us at 888-989-7223, chat with us live online, or simply send us an email.