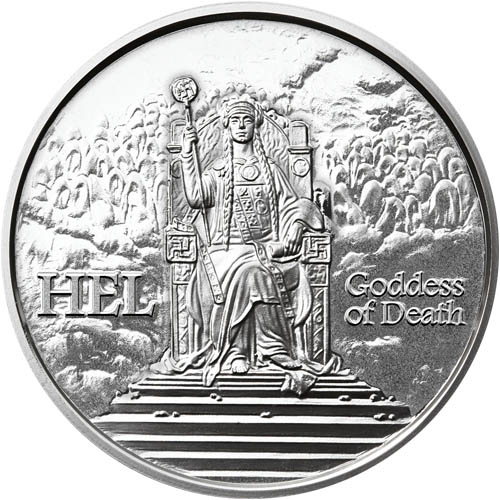 For those who have been buying silver in the Norse God Series at the Anonymous Mint, there is exciting news. The five original designs from the coveted collection are returning in yet another continuation of the series. After the original issues of proof and antique options, the Anonymous Mint now offers BU and gold-plated options for investors and collectors to purchase. Now, 1 oz Silver Norse God Series Hel Rounds are available to you for purchase online at Silver.com.

When the Anonymous Mint first introduced the five designs of the Norse God Series, collectors were offered a limited opportunity to purchase each of the low-mintage releases. The designs of Odin, Thor, Hel, Freya, and Loki were available first as 1 oz proof silver rounds with combined frosted and mirrored finishes.

Following the original collectible release, the Anonymous Mint again used the beautiful designs of the Norse deities on another collectible issue. This time, 1 oz and 5 oz silver rounds were offered that featured antique visuals for each of the figures. Once again, these designs make a triumphant return to production with a 1 oz silver BU round and a 1 oz gold-plated silver round.

Hel is depicted on the obverse of 1 oz Silver Norse God Series Hel Rounds as the first of two female deities in the collection. Hel is the Goddess of Death and the daughter of Loki, the trickster god. Hel was one of three children of Loki and the giantess Angerboda. Upon hearing of their existence in the world of the giants, Odin summoned the children to Asgard. He would eventually cast Hel down to Helheim where she would oversee the world of the dead.

The design shown here captures Hel seated on her throne as a sea of lifeless, faceless souls stretches out behind her. On occasion, Hel would leave the gates to her kingdom open on purpose to allow the dead to roam the world, much to the horror of the living.

A Valkyrie rider is depicted in the reverse design element of Silver Norse God Series Rounds. Used on all issues in the collection, the Valkyrie rider can be seen upon her powerful steed as she rides in the sky above a battle of men. The Valkyrie would scoop up those who died valiantly in battle and bring them to Valhalla to live in eternal glory.

These 1 oz Silver Norse God Series Hel Rounds are available to you with individual plastic flips. Each round in this release is available in Brilliant Uncirculated condition.

Silver.com customer service can assist you with questions at 888-989-7223. Alternatively, you can connect with us on the web using our live chat and email address options.