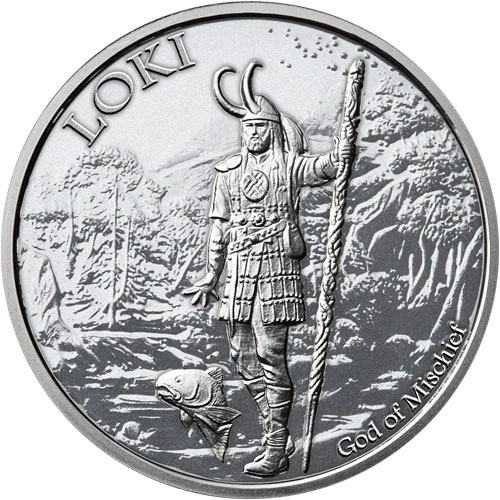 The Anonymous Mint is famous for producing a number of different silver round collections that offer unique design elements. Each of these collections has its own appeal, and one of the most popular recently released by the mint is the Norse God Series. This collection included five distinctive designs of the most popular gods from Norse mythology. Included among them was the god Loki. Today, 1 oz Silver Norse God Series Loki Rounds are available to you online at Silver.com.

The silver for sale in the Anonymous Mint’s Norse God Series includes the most popular and well-known gods from Norse mythology. The first image was that of Odin, the All-Father God. This was followed by the release of Thor, Hel, and Freya images. Loki is the final god to feature in the series. He is known as the God of Mischief. He was said to have the appearance of a handsome, graceful, and fair young man.

All of the 1 oz Silver Norse God Series Loki Rounds available here come with a protective plastic flip. The round itself is in brilliant uncirculated condition. This is the fourth different type of silver round to feature in the Norse God Series. Previous releases include a 1 oz proof, a 1 oz antique, and a 5 oz antique. Following the release of this BU silver round, you will find a gold-plated silver round from the Anonymous Mint with each of the five designs as well.

The obverse side of Silver Norse God Series Loki Rounds features an image of Loki himself. Though he is depicted here as a man, Loki is said to have the power of shape-shifting. He would often use this power to confuse and trick other gods. Often labeled a God in Norse mythology, Loki is considered a member of a giant race.

On the reverse field of the 1 oz Silver Norse God Series Loki Round, you will find a depiction of a rider of the Valkyrie. The Valkyrie were warrior maidens chosen by Odin to ride powerful steeds in the clouds above mankind’s battlefields. Known as the Chooser of the slain, they would decide who lived and who died in battle. Those who died a valiant death were chosen by the Valkyrie to go to Valhalla.

Please don’t hesitate to contact Silver.com if you have any questions about this silver for sale. You can reach out to us on the phone at 888-989-7223, connect with us online using our live chat, or simply send us an email with your inquiries.