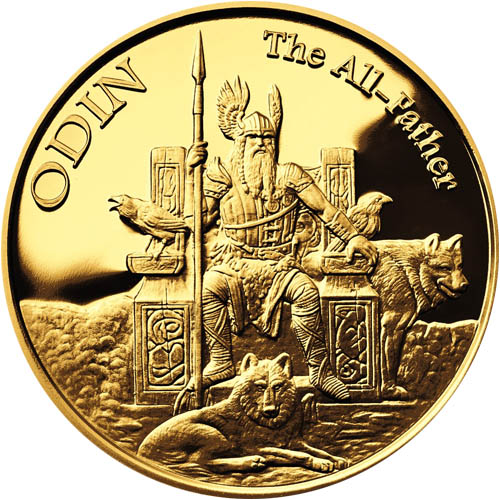 Norse mythology is as rich and detailed as that of Roman and Greek culture, but was less talked about in the ancient world as the culture of Norse civilizations was more regionally contained when compared to the might of the Roman Empire and the influence of Greek culture both within Eastern Europe and the Aegean, as well as the reach of former Greek city-states. The gods of Norse mythology are, however, nonetheless impressive. Now, 1 oz Silver Norse God Series Odin Rounds with a gold-plated finish are available to you for purchase online at Silver.com.

The designs of the Norse God Series debuted in recent years from the Anonymous Mint, with artist Howard David Johnson creating the images of each of the five gods and goddesses to feature in the collection. These images included the figures of Odin, Thor, Hel, Freya, and Loki, each one a central figure in the tales of Norse mythology.

Howard David Johnson is an American illustrator and painter whose works of art typically focus on historical, religious, and mythological art. He works to combine traditional styles and methods with newly-developed digital techniques in developing his works of art. Each one of the five god and goddess designs he created for this series was recreated on blanks for striking by Italian master sculptor Luigi Badia.

On the obverse side of 1 oz Silver Norse God Series Odin Rounds, you will find a depiction of the All-Father. Odin is the oldest and most powerful god in Norse mythology. He rules over Asgard as the leader of the deities in Norse mythology. He wields a spear known as Gungnir, a weapon that only he can throw and which never misses its mark. He is supported by his wolves Geri and Freki, with his ravens Hugin and Munin ready to fly the world and be his eyes and ears.

The reverse field of Silver Norse God Series Odin Rounds comes with a depiction of a female rider. Known as Valkyrie, this female warrior maiden is one of many chosen by Odin to ride above in the skies overhead of human battles. Those who died an honorable, valiant death in those battles were scooped up by the Valkyrie and taken to Valhalla, Odin’s great hall in Asgard with those men lived out their days in glory.

These 1 oz Silver Norse God Series Odin Rounds come with a beautiful gold-plated finish. This brilliant application of a thin layer of 24-karat gold creates visual contrast between the design elements and the background fields. The silver rounds are housed in protective plastic capsules.

Silver.com customer service is available to assist you with questions at 888-989-7223. Alternatively, you can contact us on the web through our live chat and email address features.