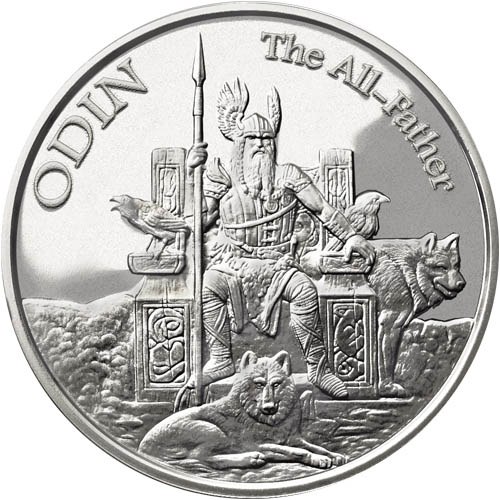 The Norse God Series was one of the Anonymous Mint’s most popular design collections of recent years. Originally issued in 1 oz proof rounds, and later in 1 oz and 5 oz antique rounds, the Anonymous Mint is bringing back the popular designs in two new versions for investors and collectors in 2020. Today, 1 oz Silver Norse God Series Odin Rounds are available to you online at Silver.com.

The Norse God Series has gone through two iterations at the Anonymous Mint already, both with the same obverse designs of each god and a shared reverse design used across all releases. These popular design elements now return for two new collectible options. These 1 oz silver rounds are part of the Brilliant Uncirculated release and will be accompanied by matching designs in 1 oz gold-plated silver round issues.

All of the 1 oz Silver Norse God Series Odin Rounds available in this product listing are in Brilliant Uncirculated condition, a new option in the Norse God designs. The silver rounds are packaged individually inside of plastic flips.

The obverse side of the Silver Norse God Series Odin Rounds include a depiction of the All-Father, or lead god, Odin. He is depicted here seated on his throne at Asgard, the land of the gods. As Odin sits on his throne, his right hand clutches a spear that is well known for never missing its mark when thrown by Odin. Two of the animals most significant to the rule of Odin are featured in the design as well. There are two wolves in the design, with one standing behind the throne and another seated at Odin’s feet. You will also notice there are ravens on the arms of his throne.

In Norse mythology, it is said that Odin relies on these ravens to be his eyes and ears in the world. Named Hugin and Munin, the ravens depart Asgard each day to fly around the human world and report back to Odin on what they’ve both seen and heard.

On the reverse face of 1 oz Silver Norse God Series Odin Rounds is a depiction of a Valkyrie on her horse. The Valkyrie was a band of warrior maidens chosen by Odin to ride over human battlefields selecting who lives and who dies. Those who die valiantly in battle are swooped up on the backs of a Valkyrie’s horse and taken to Valhalla.

Please feel free to contact Silver.com if you have any questions. You can call us at 888-989-7223, chat with us live online, or email us directly.