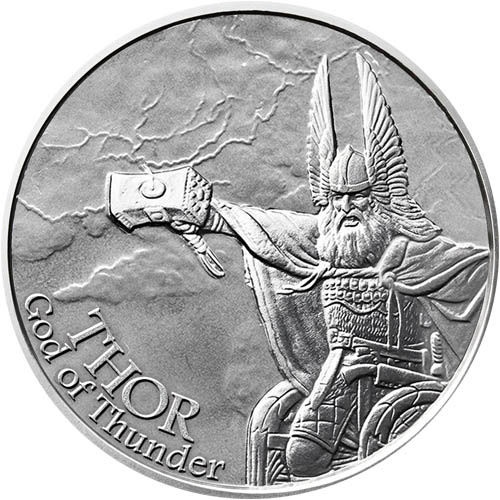 There are few gods from Norse mythology more well-known than Thor. While the age of mythology is long gone, Thor remains a popular figure for his appearance in the Marvel Cinematic Universe. Thor, son of Odin, is second to feature in the Norse God Series from the Anonymous Mint. Right now, 1 oz Silver Norse God Series Thor Rounds are available to purchase online at Silver.com.

Each of the 1 oz Silver Norse God Series Thor Rounds available here today comes with an individual plastic flip. The silver rounds offered in this continuation of the series are in Brilliant Uncirculated condition, a new option for investors and collectors following the release of 1 oz proof, 1 oz antique, and 5 oz antique options with these same designs.

Thor is known as the God of Thunder in Norse mythology. His status is said to come from the sound created by his chariot as he rides across the sky. The rolling rumble of his chariot creates the sound of thunder, while his hammer creates bolts of lightning as he throws it against his enemies. Some say the sound of crackling thunder also comes from Thor riding across the sky crushing the skulls of frost giants, trolls, and other beasts with his hammer, Mjolnir.

The obverse side of 1 oz Silver Norse God Series Thor Rounds includes a depiction of Thor. In this design, you can see Thor holding out his hammer from the back of his chariot as he rides through the skies. He wears a helmet with large, towering wings and the sky behind him begins to fill with clouds and light up as bolts of lightning begin to gather. Thor is the son of Odin, with his mother being the giantess Fjoygyn. His chariot is pulled across the sky by massive goats name Tanngrisnir and Tanngnjostr.

On the reverse field of Silver Norse God Series Thor Rounds is a member of the Valkyrie. Valkyrie are female warriors chosen by Odin to be in the sky above during the battles of mankind. Odin and his Valkyrie watch over the battles and determine who lives and who dies. Those slain in battle who fought valiantly are collected by the Valkyrie and escorted to Valhalla to live in eternal glory.

If you have any questions, Silver.com customer service is here to help. Our team is available on the phone at 888-989-7223, online using our live chat, and via our email address.