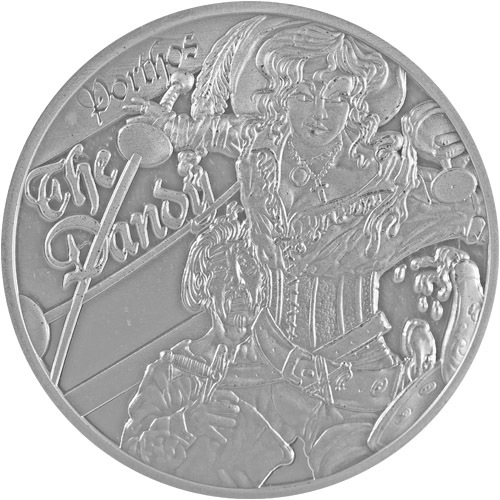 Collectors who enjoy buying silver rounds have a new option available courtesy of the Osborne Mint. The new series of silver rounds features reimagined figures from the Three Musketeers novel of the 19th century. First up in the new series is the figure known as Porthos. Today, 1 oz Silver Porthos Rounds are available to you online at Silver.com.

Alexandre Dumas wrote The Three Musketeers in 1844 and set his stories between 1625 and 1628. His depictions of the heroic, chivalrous swordsmen often confronted with difficult odds, but always up for the fight. Dumas based his novel on the character Charles de Batz-Castelmore d’Artagnan. In the story, d-Artagnan attempts to join the Musketeers of the Guard, the guardians of the King of France. Though he initially fails, the three leading musketeers of the age befriend him.

All of the 1 oz Silver Porthos Rounds available in this listing come with individual or bulk packaging options. Individual rounds ship with acrylic capsules. Multiples of the round are available in tubes of 20 rounds and boxes of 500 rounds. With the release of this new series of Three Musketeers rounds, the Osborne Mint offers images of each of the famed musketeers as women, rather than men.

On the obverse of Silver Porthos Rounds is a depiction of a swashbuckling female who steps into the role of Porthos. She has her sword drawn as a man hides behind her for protection. With a wine glass in one hand, Porthos isn’t about to let the good times end, even if she needs to jump into action.

Porthos is a fictional character in the novels and one of the three best musketeers of the King’s Guard. Porthos known to be the gregarious member of the group who enjoys wine, music, and the revelry of a local tavern.

The reverse side of 1 oz Silver Porthos Rounds comes with a common design element used throughout the series. The design element comes with silhouettes of the three female musketeers striding forward toward the viewer with a crest overhead. The identifying hallmarks are included on this side, along with the motto of the Three Musketeers.

Please contact Silver.com with any questions. Our team is available to you on the phone at 888-989-7223, online using our live chat, and via our email address.