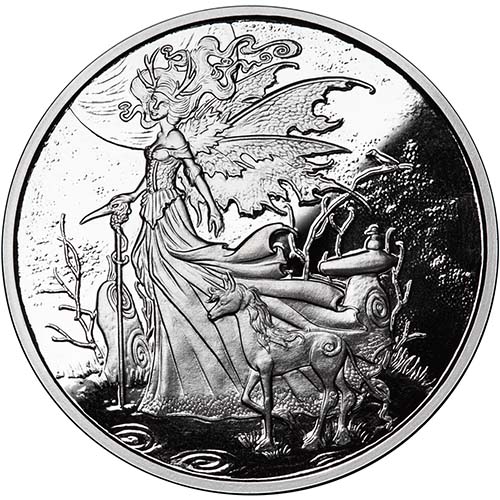 Amy Brown is currently one of the best known fantasy artists in the world. Her depictions of fairies, in particular, have earned her numerous accolades. Among those accolades, she was recently honored as being one of the top ten fantasy artists in 2017. Today, 1 oz Proof Silver Amy Brown Collection Red Queen Rounds lead off a new series from Anonymous Mint and are available to you online at Silver.com.

Amy Brown’s artistic career was launched in the 1990s with a simple request from a former boss. While employed in a small art gallery, her boss asked her to fill an empty frame on the wall with some type of work. Brown created an image of a fairy that sold almost immediately, launching her career with a bang.

Your 1 oz Proof Silver Amy Brown Collection Red Queen Round is available in a protective capsule, and comes with a numbered Certificate of Authenticity. The number on your COA matches the individual serial number found on the edge of your silver round. This is the first design in a series that will eventually feature six of Brown’s most popular fairy designs.

The reverse of all Amy Brown Collection rounds includes the same design. Her creation of the fairy known as Dusk is captured on the reverse. Dusk is a fairy visible during the twilight hours of early evening. Her delicate figure is featured on a ledge looking dreamily at you from the round’s surface as the night sky behind her slowly fills with twinkling stars.

On the obverse of the 1 oz Proof Silver Amy Brown Collection Red Queen Round you’ll find her 2016 design of a ruling fairy known as the Red Queen. The Red Queen rules over the fairy realm and is depicted walking along with her companion unicorn at her side and a small bird. She carries a scepter in her hand signifying her authority and the antlers of her crown symbolize her infinite wisdom.

All Red Queen silver rounds and other products coming in the Amy Brown Collection are products of the Anonymous Mint and struck by Osborne Mint. The Osborne Mint is the nation’s oldest operating private mint, tracing its roots back to the 1830s.

Please don’t hesitate to reach out to Silver.com with questions. Our customer service team is available at 888-989-7223, online through our live chat, or at our email address.