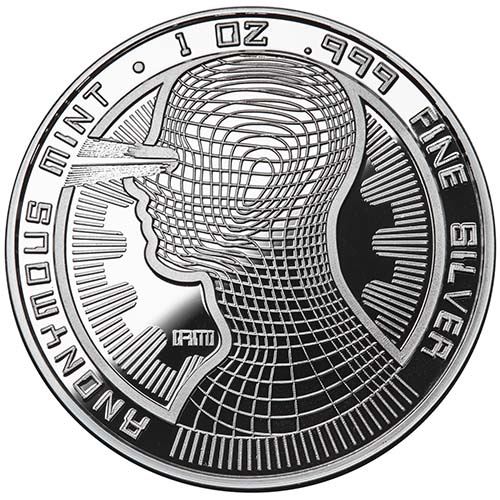 Bitcoin is the number-one choice for most consumers when it comes to cryptocurrencies. This form of peer-to-peer payment launched in 2009 under rather murky circumstances, but it has taken off in the past several years to become a popular form of electronic currency accepted by both individuals and some commercial enterprises. The 1 oz Proof Silver Bitcoin Guardian Round is available to you today online for purchase at Silver.com.

The release of the cryptocurrency known as Bitcoin remains mired in unknown circumstances. It was registered as a concept in 2008, and introduced in 2009 with the name of an individual (some say group) of Satoshi Nakamoto. Most analysts believe this a fake name used to register the product, which would be in keeping with the cryptocurrency theme of Bitcoin itself.

As a means of currency for online transactions, Bitcoin was designed solely to provide independent and free transaction for consumers who wanted to remain anonymous. Bitcoin doesn’t exist in the physical realm at all. You can’t touch it or store it in your home like coins and dollar bills. It is not issued or backed by any bank or government.

The Bitcoin silver and copper rounds offered from Anonymous Mint bring the concept of this cryptocurrency to life in physical form, even if it’s only for the purpose of a beautiful collectible piece. These 1 oz Proof Silver Bitcoin Guardian Rounds have beautiful edge lettering indicating their serial number between 1 and 3,000 in the series, with a numbered Certificate of Authenticity reflecting that status.

On the obverse of the Bitcoin Guardian Rounds you’ll find the only real symbolization available to associate with Bitcoin: the B symbol. Similar to the US Dollar, $, the Bitcoin symbol consists of the letter “B” with two vertical lines struck through the center of its figure. The background field features computer coding and rim engravings read “Premier Peer to Peer Crypto Currency” above and ‘Physical Artifact for the Real World” below.

The reverse includes the left-profile portrait of a digital male figure. Known as the Guardian, he sees all in this realm and watches out for the privacy of online shoppers. His figure is shrouded in lines and two rays emanate from his eye sockets in the design. Engravings on this face include the mint name and the weight, purity, and metal content.

As proof rounds, these Silver Bitcoin Guardian Rounds have a combination of beautiful, mirrored fields and those with a matte finish. The contrast creates the illusion of certain design aspects floating above one another.

We encourage you to contact Silver.com with questions. Please call us at 888-989-7223, chat with us live online, or simply send us an email.