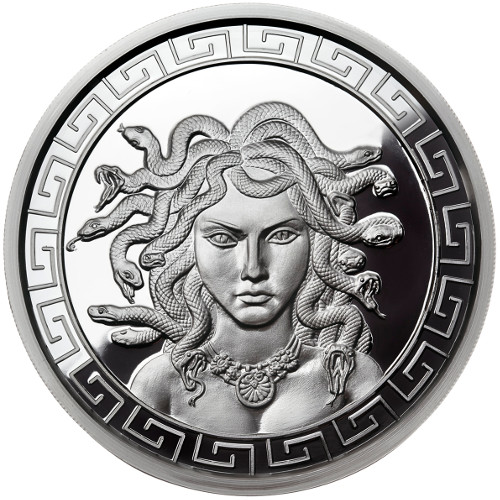 One of the most fearsome individuals from Greek mythology was the demon Medusa. Depicted in various manners, including a woman with just a head of snakes or a half-woman, half-serpent with a head of snakes, she was a sight that could turn any man into stone.

More and more often investors are turning to rounds as a way to invest in silver as they are a great alternative to silver bars due to their low premiums over the price of silver, and their unique designs such as this one. Right now, the 1 oz Proof-Like Silver Medusa Round is available on Silver.com in new condition.

The vision of Medusa as a demon varies by source, but one thing is for sure: her gaze could turn any man to stone. Medusa was once said to be a beautiful, blonde-haired maiden who was one of the gorgon sisters. However, Athena cursed Medusa to a life of hatred and fear by men.

Medusa fell in love with and developed a relationship with the God of the Sea, Poseidon. After she lay with him in Athena’s temple, Athena responded by turning Medusa’s blonde hair to snakes, her fair skin to a green-blue hue, and making her so unattractive to men that a mere glance in her eyes would freeze them in stone for eternity.

On the obverse of the 1 oz Proof-Like Silver Medusa Round you’ll find the portrait of Medusa that includes a full head of snakes. Medusa turned countless men to stone until Perseus, half-man, half-god, conquered her by decapitating her and giving her head to Athena.

The reverse of the 1 oz Proof-Like Silver Medusa round is the image of the Anonymous Mint’s logo. The United States Mint uses the American bald eagle in a heraldic eagle design, and the Anonymous Mint has its own take on that classic image. Set behind a shield holding arrows and an olive branch in its talons, you’ll find not an American bald eagle by a wise and insightful owl.

Coin Creator Julie Lindquist developed the Medusa Silver Round series Anonymous Mint. The mint itself is a private minting facility that produces all of its products in the United States of America. Each of these 1 oz Proof-Like Silver Medusa Rounds has a proof, mirrored finish and includes individual serial numbers on the edge of the round.

If you have any questions for Silver.com, our customer service associates are available to help you. You can contact us on the phone at 888-989-7223, connect with us online using our live web chat, or simply send us an email.