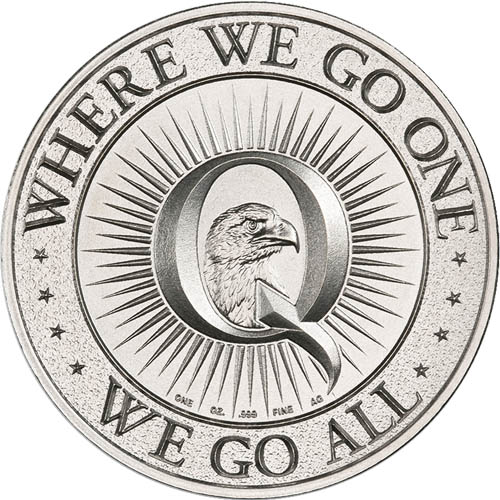 Everyone loves a good conspiracy theory. Whether it’s the debate over the existence of UFOs and a US government cover-up following the incident in Roswell, New Mexico, or disputes over the identity of JFK’s true assassin, conspiracy theories abound. QAnon has been posting in online message boards with modern conspiracy theories since October 2017, and whether you subscribe to those theories or not, they always generate buzz. Right now, 1 oz Silver Qanon Rounds are available to purchase online at Silver.com.

Each of the 1 oz Silver Qanon Rounds in this product listing is available to you in Brilliant Uncirculated condition. You can purchase these silver rounds individually inside of protective plastic flips or in mint tubes of 20 rounds.

The phenomenon surrounding QAnon began in the smaller corners of the Internet where conspiracy theories were kicked around, places such as the 4chan message boards. Beginning in October 2017 though, these messages began to gather greater notoriety as the anonymous “Q” figure posted on a wider range of message boards.

No one knows exactly who this “Q” figure is, only that he claims to be a high-ranking military officer with access to top-secret information that proves nefarious plots are afoot within the US government. The focus of the vast majority of the content is on the “Deep State” concept that rogue actors within the federal government are acting to subvert the will of the people. The visibility of “Q” has grown to such a point that posters supporting the individual have even been seen at rallies held by President Donald Trump.

On the obverse side of 1 oz Silver Qanon Rounds is the image of a “Q” struck in high-relief with the head of an American bald eagle visible peering out through the center of the capitalized letter. The phrase “Where We Go One, We Go All” is engraved around the outer rocker of the design field.

Flip the Silver Qanon Round over to the reverse and you’ll notice an American bald eagle gracefully gliding in flight. Its wings spread wide, the eagle holds an olive branch in its talons as the rays of the sun burst out from behind its figure. An engraving above reads simply “God Bless America.”

If you have any questions, please feel free to call Silver.com. Our customer service team is available to you at 888-989-7223, online using our live chat, and via our email address.