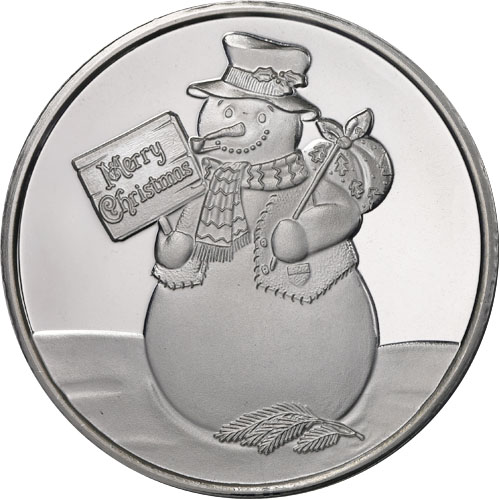 You see them in front yards every year when the snow starts to fall. The first thing young children and those who are young at heart love to do in winter is build a snowman. A fun depiction of the human form in cold, wet snow, a snowman is easy to build and fun to leave in the front yard. If you want to ditch the cold and forget the snow, capture your own on a new silver round. The 1 oz Silver Snowman Round is available to you online today at Silver.com.

It isn’t something most would look into, but believe it or not the concept of building snowmen in the freshly fallen snow is not a new one. The earliest known picture of a snowman was taken in 1853 by a Welsh photographer by the name of Mary Dillwyn. The original photo she took is actually still on file in the collections of the National Library of Wales.

Snowmen became a popular theme around the Christmas season with the advent of the popular character Frosty. Known better as Frosty the Snowman, he was popularized in a children’s song that was later adapted into the film and television specials most people today have seen at least once.

On the obverse of these 1 oz Silver Snowman Rounds you’ll find a different take on the snowman. When a traditional figure is built in the backyard by children, it is three simple snowballs stacked on each other. Snowmen usually get twigs from fallen tree branches for arms and a carrot for a nose. Lucky snowmen get coal or rocks for eyes and a mouth.

This design depicts a snowman with a little more humanity in his features. Rather than twigs for arms, he has human-like arms molded from the snow. He holds a knapsack full of goodies in his right hand, and a sign in his left that reads “Merry Christmas.” This snowman also wears a top hat with a scarf around his neck.

We encourage Silver.com customers to contact us with questions. You can reach us on the phone at 888-989-7223, chat with us live on the web, or send us an email.