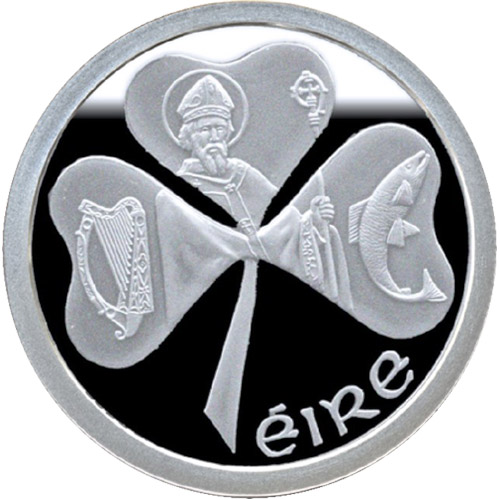 While the celebration of St. Patrick’s Day each March 17th, revelers pack pubs, private parties, and public parades to drink green beer and have a good time with friends. In Ireland, two Canadian provinces, and the British Overseas Territory of Montserrat, the day is a public holiday that government employees have off to partake in the festivities. Today, 1 oz Silver St. Patrick’s Day Rounds are available to you online at Silver.com.

The festival of St. Patrick’s Day was first established in the early 17th century by the Catholic Church as a celebration of St. Patrick and his efforts to bring Christianity to the island. Today, in addition to being a public holiday in Ireland and a handful of other provinces around the world, St. Patrick’s Day is the most celebrated national festival in terms of its reach beyond the borders of Ireland.

All of these 1 oz Silver St. Patrick’s Day Rounds are available to you for purchase with either individual flips or plastic tubes of 20 rounds. All of the silver rounds are brand new from the mint and boast proof-like visuals. Those visuals consist of slight frosting on the designs and mirrored finishes in the background field.

The design on the obverse of Silver St. Patrick’s Day Rounds includes a three-leaf clover as the dominant visual aspect. Within the sections of the clover, you will find the Harp of Ireland, a fish, and the holy figure of St. Patrick. The word “Eire” is also inscribed on this side. This is the Old Irish term for the island itself and the sovereign state of the Republic of Ireland.

On the reverse side of 1 oz Silver St. Patrick’s Day Rounds, you will find a map of the island of Ireland. The map shows no political divides between the Republic of Ireland and Northern Ireland. Instead, it captures the historic unity of the island in depicting its four historic provinces by name. The coat of arms for the four provinces of Leinster, Munster, Connaught, and Ulster are shown over the regions of the island that each encompasses. Each province consists of several counties, with only Ulster split between the two modern nations. Six of Ulster’s nine counties make up Northern Ireland, while the remaining three, all in the west, are part of the Republic of Ireland.

Please contact Silver.com if you have any questions. Our team is available to assist you on the phone at 888-989-7223, online through our live chat, and using our email address.