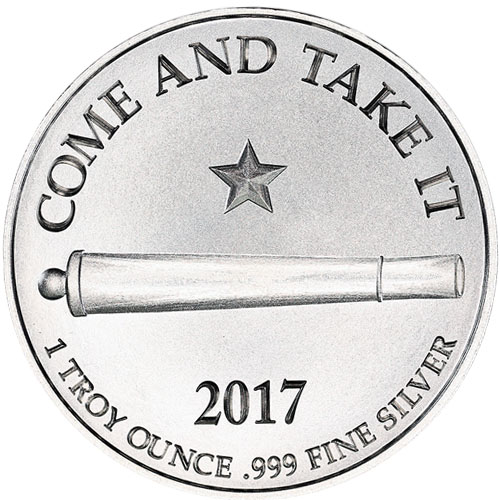 Texas might be the second-largest state in the US by size and population, but there’s no questioning the fact that the Lone Star State has the bravado and confidence worthy of the largest state in the United States. It was that bravado that led a former Mexican province to declare its independence, exist as an independent republic, and then join the United States. Today, 1 oz Silver Texas “Come and Take It” Rounds are available to you online at Silver.com.

The war for Texas independence from Mexico might have revolved around a desire for self-determination and governance, but the fuse was lit and the powder set off by a verbal dispute surrounding a small copper cannon. The people of Gonzales, Texas requested a cannon for protection against hostile native tribes.

Mexico, then rulers over much of modern-day Texas, delivered a small six-pound caliber bronze artillery cannon originally made by the Spanish. The cannon was delivered in March 1831, but by September 1835 the Mexican military had requested its return. A group of Anglo-Celtic colonists in Gonzales refused to return the cannon, pointing to it 200 yards behind their line during a confrontation with a Mexican military detachment from Bexar and famously stating “there it is – come and take it.”

On the obverse of the 1 oz Silver Texas “Come and Take It” Round you’ll find the modified seal of the State of Texas. The seal for the state today was adopted through the 1845 Texas Constitution as a state, but it was largely derived from the seal of the Republic of Texas when the state was an independent nation and dates to January 25, 1835. The engraving of “The Great State of Texas” has the added word “Great” courtesy of Intaglio mint.

The reverse of the “Come and Take It” Round includes two primary design engravings in the center. The Lone Star of Texas is included above a depiction of the Gonzales Cannon. “Come and Take It” is engraved above, with “1 Troy ounce .999 Fine Silver” and the issue date of “2017” below.

Mark Bogani is the designer of these rounds, and CEO of the Intaglio Mint. Located in Waco, Texas, Intaglio Mint is relatively new to the industry, having opened its doors for business in 2010.

Please feel free to contact Silver.com with your questions. We’re available on the phone at 888-989-7223, on the web through our live chat, and at our email address. Don’t forget you can find silver spot prices on our website at any time!