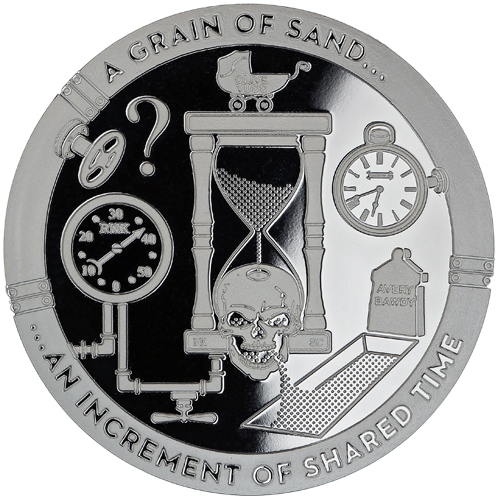 One of the more unique silver rounds released in the past year is part of a series from the North American Mint and Chautauqua Silver Works. The T.I.M.E. Series from the two companies focuses on the impact and role of time, and time-keeping, in human civilization. The designs are altogether unique, and unlike anything else available today. Silver.com now offers the 1 oz Silver TIME Series A Grain of Sand Round in proof-like condition for purchase.

Following the successful release of the moving-gears design in the TIME Series, the North American Mint and Chautauqua Silver Works prepared the second of three planned design in the series. The 1 oz Silver TIME Series A Grain of Sand Round was created as commentary on the role of time in human life.

The very design of the A Grain of Sand Silver Round speaks to the life cycle of humans, and how each grain of sand that passes is that much less time to go in life. The hourglass design on the round features a baby’s carriage on top of the glass, with the grains of sand emptying out of the open mouth of a human skull and into an open grave at the bottom.

On the obverse side of the 1 oz Silver TIME Series A Grain of Sand Round you’ll find the hourglass design. The most shocking part of the imagery is the open grave the sand empties out of the hourglass into. If you look closely you’ll see the name “Avery Bawdy,” or everybody, on the headstone of the grave site.

The reverse side of the round features the Chautauqua Silver Works brand imagery, which focuses a gunsight on the center of the round’s design with the word “Bullseye” and the atomic symbol for silver in the center.

Each of these 1 oz Silver TIME Series A Grain of Sand Rounds was created by the Chautauqua Silver Works, which was founded by Ron Kinney in Western New York. The rounds are struck and distributed in collaboration with the North American Mint.

If you have any questions, please don’t hesitate to ask a Silver.com associate by contacting us at 888-989-7223, or connecting with us online through our live chat or email services.