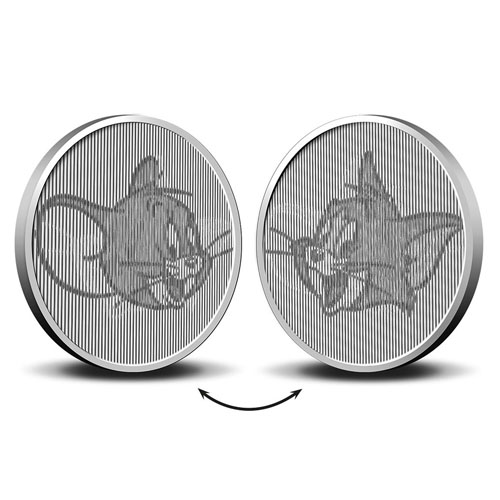 The Royal Dutch Mint offers an exclusive silver round for sale that honors the 80th anniversary of one of the most well-known animated duos in history. In 1940, Tom & Jerry made their debut in animated shorts that followed the escapades of a cat and mouse battling it out with one another. The animated cat-and-mouse game that played out between the two in each short was enhanced by the combination of music and sound effects that added to the humor of the series. Today, 1 oz Silver Tom & Jerry 80th Anniversary Rounds are available to you online at Silver.com.

All of the 1 oz Silver Tom & Jerry 80th Anniversary Rounds available here come to you in protective plastic capsules. The rounds have a special lenticular design that enables both Tom and Jerry to feature on the obverse independently, based on your viewing angle. As you rotate the round in your hand, the images switch back and forth between Tom and Jerry.

The obverse side of Silver Tom & Jerry 80th Anniversary Rounds features the images of the titular characters. As you rotate the round and see the face of Jerry, you will get a right-profile image of the cartoon mouse. As you continue rotating, this will switch over to feature a left-profile portrait of the cartoon cat, Tom.

On the reverse face of 1 oz Silver Tom & Jerry Rounds is the 80th-anniversary logo. The series name is featured above the design with silhouettes of Tom and Jerry chasing one another around the field. The identifying hallmarks are also on this side.

Please contact Silver.com if you have any questions. Our team can assist you at 888-989-7223, chat with you live online, or respond via email.