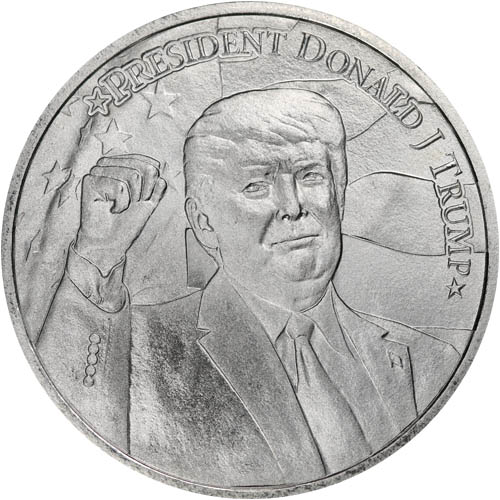 After fighting hard to win the 2016 US Presidential Election, Donald J. Trump has focused on fulfilling his campaign promise to “Make America Great Again.” With hopes of winning reelection in 2020, President Donald J. Trump will be hoping to “Keep America Great” as he campaigns for a second term. The 1 oz Silver Trump 2020 Round is now available to you for purchase online at Silver.com.

President Trump needed only 270 Electoral College votes to win and did so by breaking down the previously rumored Blue Wall, a series of states in the Great Lakes and Midwest that had gone to the Democrats in countless previous elections. His victories in Wisconsin, Ohio, Michigan, and Pennsylvania helped propel him to victory. All this came in spite of losing the national popular vote by almost 3 million. President Trump also carried more states in total than Clinton by a figure of 10.

The obverse of the 1 oz Silver Trump 2020 Round includes a portrait of President Trump with his right fist raised victoriously as he celebrates his election in 2016. President Trump is running again in 2020 hoping to “Keep America Great.” The background field includes the American flag as it waves in the breeze. An inscription above the president’s head reads “President Donald J. Trump.”

On the reverse of Silver Trump 2020 Rounds is the image of the White House. The official residence of the President of the United States of America since the administration of President Thomas Jefferson, the design here is that of the northern face of the White House. This entrance to the structure is framed by towering marble pillars and is one of the iconic visuals of the presidential office and residence.

These 1 oz Silver Trump 2020 Rounds are available to you in brand-new condition. Individual silver rounds will ship inside of protective plastic flips. For multiples, these rounds ship in generic tubes of 20 or boxes of 500 rounds.