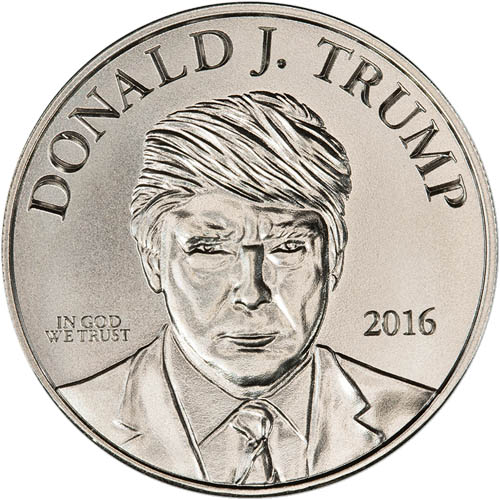 Donald J. Trump launched his campaign for the Republican nomination to be President of the United States of America in July 2015. From the lobby of Trump Tower in Manhattan, he announced that he’d be running to earn the Republican slot for the 2016 Presidential Election. He bested 17 other Republican hopefuls and went on to become the 45th President of the United States of America. Now, 1 oz Silver Trump Campaign Rounds are available to you for purchase online at Silver.com.

The Trump Series of silver rounds from the Intaglio Mint features a variety of designs with two possible reverse images available. Those medals which reflect his status as President of the United States of America have the modified presidential seal. This particular silver round marks his campaign date prior to winning the election, and as such has a different image of the American bald eagle as he was not president yet.

When the Republican Primary campaign began there were a total of 17 individuals vying for the right to represent the Republican Party in the 2016 presidential election. After months of campaigning, the only remaining contenders with a legitimate chance to nab the nomination were Gov. John Kasich of Ohio, Senator Marco Rubio of Florida, Senator Ted Cruz of Texas, and businessman Donald J. Trump. Though Sen. Rubio and Sen. Cruz would win several states throughout the primary campaign and slow Mr. Trump’s run to the nomination, neither was as successful with Mr. Trump ultimately winning 41 states/territories.

On the obverse of 1 oz Silver Trump Campaign Rounds is a depiction of Donald J. Trump. This front-facing portrait captures Mr. Trump with a serious look on his face and includes inscriptions of “Donald J. Trump,” “In God We Trust,” and “2016.”

The reverse of Silver Trump Campaign Rounds includes the image of an American bald eagle’s head in left-profile relief. The radial sunburst background effect is included and the president’s campaign slogan of “Make America Great Again” is featured at the top of the design rocker.

These 1 oz Silver Trump Campaign Rounds are available to you in brand-new condition. Individual rounds ship with protective plastic flips while multiples of up to 20 rounds are housed inside of mint tubes.

We encourage Silver.com customers to call us at 888-989-7223 when buying silver. You can also connect with us online through our live chat and email address options.