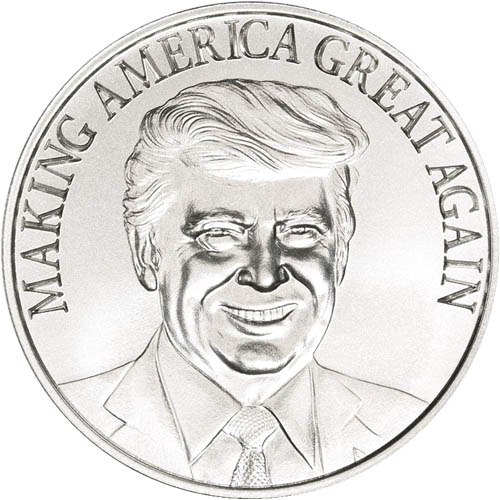 The 45th President of the United States of America is Donald J. Trump. Elected in the 58th US Presidential Election in November 2016, Mr. Trump defeated Hillary Clinton and ran on a campaign to “Make America Great Again.” His campaign slogan remains a critical focus of his time in office as well. Today, 1 oz Silver Trump Making America Great Again Rounds are available to you online at Silver.com.

President Trump ran for office on a campaign platform focused on “Making America Great Again.” It was his goal to boost the economy further and revive the dying manufacturing sector in the United States. By certain measures of economic vitality, Mr. Trump has proven successful in his aims. For example, the stock market has set numerous records for all-time high levels across the Dow Jones Industrial Average, NASDAQ, and S&P500.

All of the 1 oz Silver Trump Making America Great Again Rounds in this product listing are available to you with individual protective plastic flips or mint tubes for multiples of up to 20 rounds. Each piece of silver for sale here comes in brand-new condition from the mint.

On the obverse of 1 oz Silver Trump Making America Great Again Rounds, you will find a portrait of Donald J. Trump. Mr. Trump is depicted here with a smile on his face and the phrase “Making America Great Again” inscribed above his head. Among President Trump’s focuses while in office is improving employment among manufacturing industries that have long been declining. During his first 30 months in office, the manufacturing sector added 449,000 jobs, the highest figure in years.

The reverse side of Silver Trump Making America Great Again Rounds includes a modified version of the seal of the President of the United States. The heraldic eagle is in the center of the design with the heraldic shield on its chest and a ribbon in its beak that reads “E Pluribus Unum.” One talon clutches a single olive branch of peace while the other holds 13 arrows of war. There is a radial sunburst background and the outer design rim includes the phrase “Seal of the President of the United States.”

Please don’t hesitate to contact Silver.com if you have questions. You can call us on the phone at 888-989-7223, chat with us live online, or email us directly.