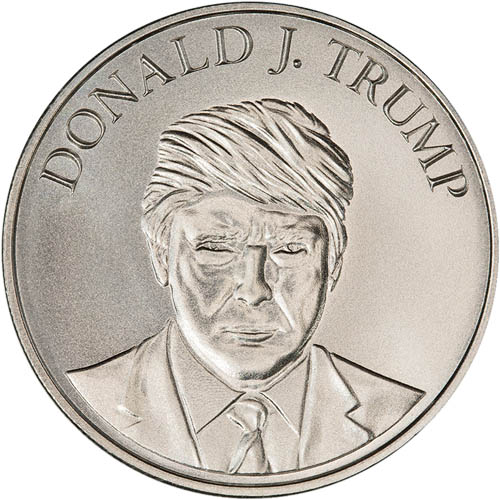 The 2016 US Presidential Election was one of the most hotly contested elections in recent memory. The American people were deeply divided between the two candidates, but in the end, it was businessman and first-time politician Donald J. Trump that emerged victoriously and became 45th President of the United States of America. Right now, 1 oz Silver Trump Presidential Rounds are available to purchase online at Silver.com.

Each 1 oz Silver Trump Presidential Round in this product listing is available to you for purchase online in brand-new condition. The silver rounds in this series are housed inside of protective plastic flips for individual rounds or inside of mint tubes of up to 20 rounds when buying multiples.

On the obverse of 1 oz Silver Trump Presidential Rounds is a front-facing portrait of President Donald J. Trump. The only inscription available on this face of the round is his name as “Donald J. Trump” featured above the portrait.

If you have any questions, we encourage you to contact us at Silver.com. Our customer service team is available at 888-989-7223, online using our live chat, and via our email address.