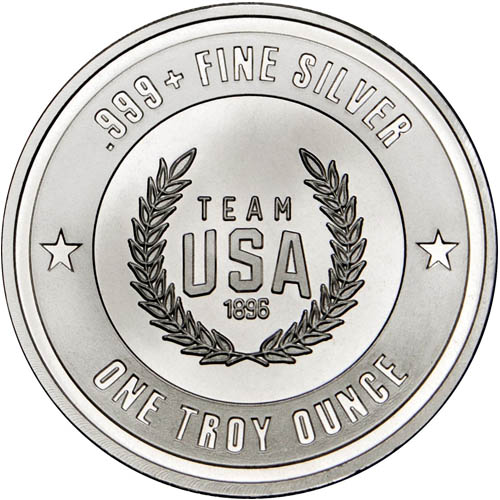 Regardless of the state of global affairs, there is one event held every four years that can bring athletes from all nations together in the spirit of peace and competition. The Olympics are held every four years, with Summer and Winter Games offset from one another by two years. Since 1896, the United States Olympic Committee has fostered an environment of competitive accomplishment for American athletes. Celebrate this heritage with the 1 oz Silver US Olympic Team Round, available online today at Silver.com.

Each of the 1 oz Silver US Olympic Team Rounds in this Silver.com listing comes from A-Mark Precious Metals, and is produced under license and authority of the United States Olympic Committee. The rounds ship to you in bulk orders if you wish, with multiples of 20 available in mint tubes. Those mint tubes are packaged in sleeves of five tubes each, with five sleeves in total packaged into a master box for purchases of 500 total rounds.

The United States Olympic Committee was formed in 1894, just two years ahead of the modern revival of the Olympic Games. The first Olympic Games were held in the city of Olympia, Greece around the year 776 BC. More than 2,000 years later, the games were revived for modern nations of the world to participate in. Those first games were held, appropriately, in the city of Athens, Greece.

On the obverse of these 1 oz Silver US Olympic Team Rounds you’ll find the image of the US Olympic Team heritage mark. This mark includes the words “Team USA” in the very center with the formation year of 1896 below it. These engravings are surrounded on two sides by olive branches that form a U-shaped wreath. The outer design rim on the obverse surface includes two stars, one on either side, and the words “.999+ Fine Silver” above and “One Troy Ounce” below.

The reverse of the US Olympic Team Round includes the design of the United States Olympic Committee’s emblem. This emblem includes a representative version of the flag of the United States of America on top and the five interlocking Olympic rings below. Though the flag takes on the familiar design of the US flag, it is not an exact replication as it does not have 50 stars included. The outer design rim on the reverse surface also includes an engraving of two stars, with added engravings of “United States” above and “Olympic Team” below.

If you have any questions about these silver rounds, please feel free to contact Silver.com. Our customer service team is available to you on the phone at 888-989-7223, online using our live web chat, and via our email address. You can also find the latest price of silver per ounce listed on our website throughout the day!