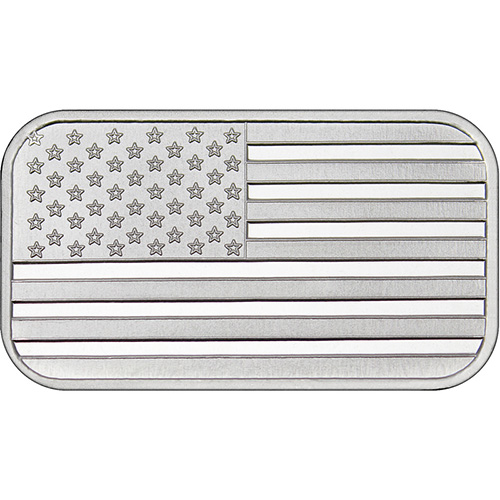 The very first version of the United States flag differed little from what we commonly know today as the official national flag of the nation. Adopted on June 14, 1777, during the Revolutionary War with Great Britain, the original US flag had a field of 13 red-and-white stripes with a blue canton in the upper left that included a circle of 13 five-pointed white stars. Today, 1 oz Silver SilverTowne American Flag Bars are available to you in brand-new condition at Silver.com.

The modern US national flag featuring a field of 50 five-pointed stars on a blue canton field was adopted on July 4, 1960, the nation’s 184th birthday. This came just months after the final two states ever admitted to the Union were accepted by Congress. Hawaii and Alaska were the final two states to join the Union and they reflected the 49th and 50th stars added to the flag.

Each of the 1 oz SilverTowne American Flag Bars in this listing comes with unique alternating finishes on the 13 stripes within the American flag. Where you’d originally find white stripes, you’ll notice on these silver bars a polished, matte finish. Conversely, what would otherwise be red stripes on the flag are proof-like, reflective aspects.

On the obverse of 1 oz Silver SilverTowne American Flag Bars is the image of the national flag. A symbol of freedom and power around the world, the only changes ever to come to the US flag since 1777 have been the rearranging and addition of stars in the blue canton to reflect the growing number of states in the Union over time.

The reverse of SilverTowne American Flag Bars includes a blank design field in the center flanked on either side by bundles of leaves. The engravings include “One Ounce” above the blank field and “.999 Fine Silver” below.

Please feel free to reach out to Silver.com with any questions. You can call us on the phone at 888-989-7223, chat with us live online, or simply send us an email with your inquiries.