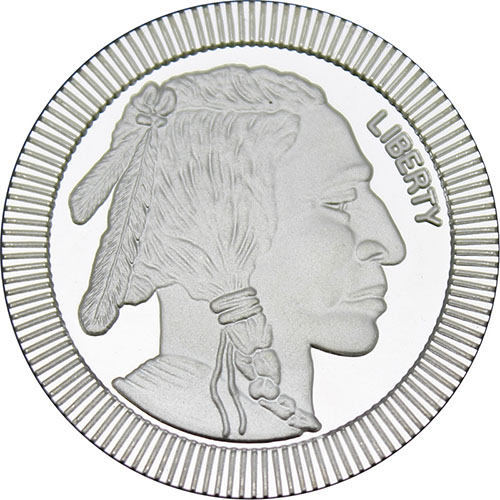 SilverTowne is one of the most prominent private mints in the United States. Among its most popular products are its silver rounds featuring designs originally found on the obverse and reverse face of circulation American coinage. The 1 oz Silver SilverTowne Buffalo Stackable Round is available to you online at Silver.com.

The Buffalo Nickel was one of America’s greatest coin designs. Designed by James Earle Fraser in 1913, it would grace the nation’s five-cent piece for 25 years through 1938. It featured imagery picked from Fraser’s life growing up in the Upper Midwest. On one side of the coin he used the depiction of a buffalo, and on the other he combined facial features from different individuals to create a Native American chieftain.

On the obverse of the 1 oz Silver SilverTowne Buffalo Stackable Round you’ll find the image of Fraser’s Native American chieftain. He turned to three different real-world Native American tribal leaders to combine facial features and come up with his left-profile portrait on the obverse face of the coin.

The reverse of all SilverTowne Buffalo Stackable Rounds includes Black Diamond. This American bison was a resident of the Central Park Zoo in New York City during the early 20th century. The buffalo is shown standing on a small mound of dirt on both the original Buffalo Nickel and these SilverTowne rounds.

Each 1 oz Silver SilverTowne Buffalo Stackable Round in this collection has a rim design that includes alternating raised and lowered edges so the rounds can be easily stacked for storage and display. The rounds are part of a venture between A-Mark Precious Metals which was launched by the two precious metal refiners in 2015.

Please feel free to reach out to Silver.com if you have any questions regarding your silver round purchase. Our customer service associates are available to you on the phone at 888-989-7223, on the web using our live chat feature, and via our email address.