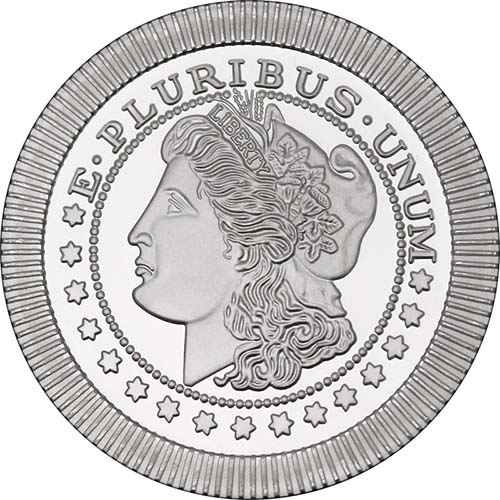 The Morgan Silver Dollar remains one of America’s most beloved silver coin designs, even if it was met with a lukewarm reception when it was introduced in 1878. Today, the Morgan design lives on as the face of countless silver round collections and is now available in a brilliant new format from SilverTowne Mint. The 1 oz SilverTowne Silver Morgan Stackable Round is available to you to purchase today online at Silver.com.

The Morgan Silver Dollar remained in circulation in the United States from 1878 until 1904 when legislative maneuvering again resulted in an end to silver dollar coining from the mint. The silver dollar would not reappear in the US until after World War I, with the Morgan design featuring again through most of 1921, until it was replaced by the new Peace Silver Dollar design.

On the obverse of the 1 oz SilverTowne Silver Morgan Stackable Round you’ll find the original design of Liberty created by Morgan. George T. Morgan was British by birth and actually worked as an apprentice at the Royal Mint in England, but with no path forward there he came to the US to take on an apprenticeship at the US Mint, eventually creating this left-profile portrait of Liberty.

The reverse of the Morgan Silver Round was also created by Morgan, and it features a bald eagle clutching an olive branch of peace in one talon and the arrows of war in the other. The eagle’s head faces the olive branch, and is often used on coinage to indicate the nation’s preference for peace and lack of desire to be engaged in war.

All 1 oz SilverTowne Silver Morgan Stackable Rounds have a proof-like background finish, lending a mirrored visual to the coin’s finish. Each one has a rim design that includes alternating raised and lowered teeth so you can stack your new silver rounds more steadily during storage and transport.

We encourage all Silver.com customers to contact us with questions. You can reach out to us at 888-989-7223, online through our live chat, or by sending us an email with your inquiries.