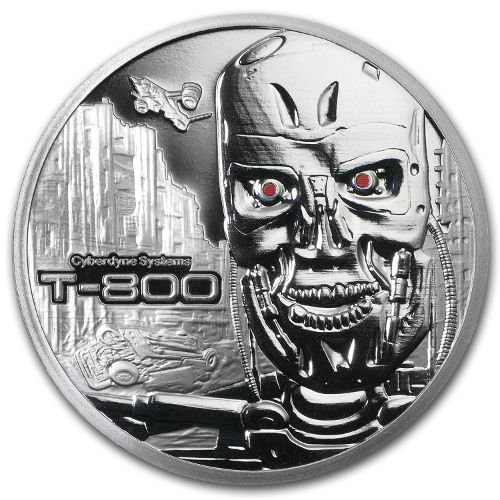 In celebration of 30 years of the Terminator franchise, the newly-formed Stardust Silver minting facility has launched a new series of bullion and proof silver rounds. The Terminator feature films launched the career of Arnold Schwarzenegger, and has seen recent reboots bring fans back to the franchise. Right now, the 1 oz Silver Stardust Terminator Round is available in new condition on Silver.com.

More and more often investors are turning to rounds, and unique designs such as this one, as a way to invest in silver as they are a great alternative to silver bars due to their low premiums over silver spot price.

The Terminator feature-film franchise followed the struggle of mankind and the contrasting worlds of 2029 and 1984. A T-800 Terminator machine was sent back in time to kill Sarah Connor, the mother of John Connor who was leading the human resistance against the machines in 2029.

Arnold Schwarzenegger played the famous role of the T-800 in the three original feature films, and even returned recently to play the machine one more time in a 2015 reboot of the film franchise. The machine’s face is on one side, and its schematic design on the other.

On the obverse face of the round is the image of the T-800’s face staring directly back at you. In the background you’ll notice the futuristic battlefield of 2029, and an engraving of the words “Cyberdyne Systems” and “T-800.”

The reverse bears the engraving in the top half of the coin of the motto from the movie that sets the stage for the narrative. “The Terminator” is engraved in the middle, and the full-body image of the T-800 is featured below. Along the outer rim of the coin, on its narrow edge, is an engraving of the individual serial number for each round.

These 1 oz Silver Stardust Terminator Rounds are available with those individual serial numbers and a certificate of authenticity. The coins are the work of Stardust Silver, with production assistance from Sunshine Minting.

You can connect with Silver.com by calling 888-989-7223. You can also send us your questions using our live chat and email address. If you are interested in similar products, be sure to check out our selection of Silver Rounds.