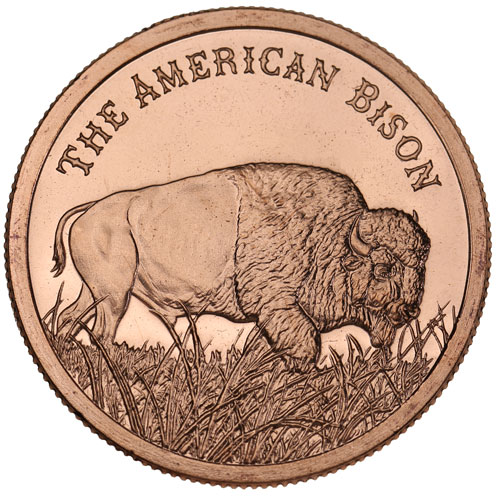 This one ounce copper round has been carefully designed and minted by NTR Metals. As its name reflects, the coin features a design commemorating the American Bison which calls North American its home. Each one of these copper rounds consists of one Avoirdupois ounce of fine copper which is .999 pure.

On the obverse of each round is an image of the American Bison as he grazes along a grassy meadow. This animal was once much more common than it is today, but unfortunately due to over-hunting in the 1800’s, the American Bison almost became extinct. Before the New World was discovered by Columbus, some estimates indicate that their was roughly 60 million of these animals roaming North America. By the end of the 19th century there were only approximately 750 known to exist. This brand new copper round from NTR has brought the creature back to life with extreme attention to detail.

The reverse side of the round contains a United States shield which has become a hallmark of sorts for NTR Metals’ copper bullion products. Surrounding the round are 13 stars, reflecting America’s original 13 colonies. Atop the round are markings which indicate the rounds weight and purity which reads; “1 Ounce Copper .999.” Aside from being available as individual pieces, larger orders containing increments of 20 rounds will be shipped in their mint sealed plastic tubes.

We package all orders as securely as possible to protect your metals from unwanted damage occurring from the packages time in transit. We also insure everything we ship out to further protect our customers. Any questions regarding any of our copper or precious metal products are welcomed and our helpful staff can be reached toll free at 888-989-7223.