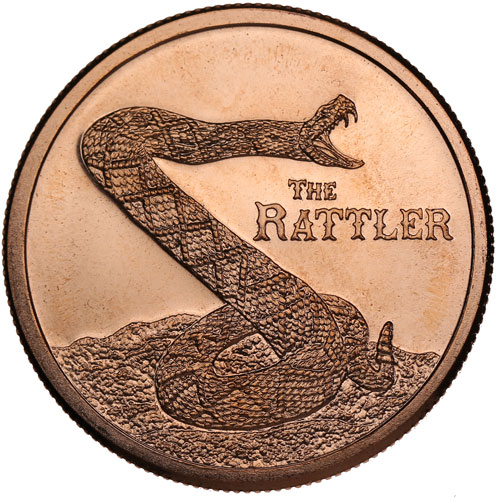 This 1 oz copper round has been produced by NTR Metals (Northern Texas Refinery). Though copper is one of their newer offerings, they are quickly becoming very popular among coin enthusiasts and metal investors alike. All of their rounds, including The Rattler, consist of 99.9% pure copper and weigh one avoirdupois ounce.

The design which appears on this round reflects one of the United States most well-known snakes; the Rattler. This venomous North American snake get its name from the noise that its tail makes when shaken. This feature is thought to have evolved over time by the snake to ward off potential predators and has helped to make the species a household name.

The obverse of each round features an image of the Rattler at its center. This scene depicts the snake showing off its venomous fangs mid-strike as it almost appears to be jumping off the round. Great detail has been used to bring the animal to life and one can almost make out every scale on the serpents body. The words “The Rattler” are also featured aside the image.

The back side of the round features an American shield which has become the hallmark NTR uses on most of its copper bullion. Forming a circle around the edge of the piece are 13 stars representing the 13 original colonies of the United States. Inscribed above the shield are markings for the rounds weight, purity and metal type which reads: “1 Ounce Copper .999.”

If you would like to inquire about The Rattler or any of our other pure copper rounds, we can be reached toll free at 888-989-7223. Please note that these rounds are also available in their mint-sealed tubes which will be used for orders which include increments of 20 pieces. All smaller orders are shipped in individual vinyl coin flips. No matter what size your order, we mail all of our packages discreetly and fully insured.