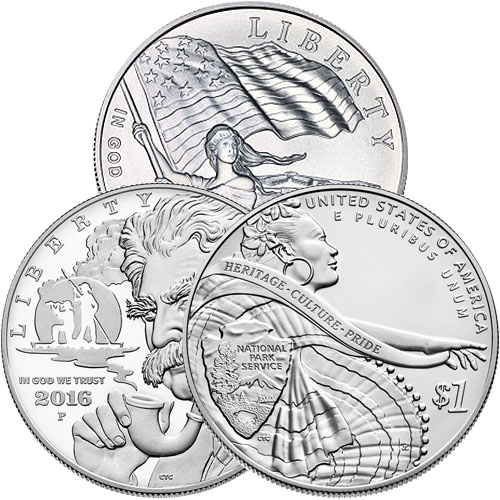 In 1982, the United States Mint issued its first modern silver commemorative coin in the form of a half-dollar coin meant to celebrate the 250th birthday of the nation’s first president, George Washington. One year later the US Mint would issue its first $1 Silver US Mint Commemorative Coin with a celebratory coin for the upcoming 1984 Summer Olympics.

All of the $1 Silver US Mint Commemorative Coins in this product listing are available to you inside of their original protective capsules from the United States Mint. From 1983 to 1991, the US Mint was extremely active in the production of $1 commemorative silver, but has since taken on a more random production schedule.

Some of the most common designs from this era include commemorative Olympic silver coins and those celebrating important people, monuments, and moments in American history. For example, in 1989 a $1 Silver US Mint Commemorative Coin was issued honoring the 200th anniversary of the first United States Congress. The coins included the Statue of Freedom on the obverse and the Mace of the House of Representatives on the reverse.

The 1990 $1 Silver US Mint Commemorative Coin featured images of Dwight D. Eisenhower to mark his 100th birthday. Two profiles of Eisenhower were featured on the coin’s obverse, with one capturing his figure as the four-star US Army general who served as Supreme Allied Commander in Europe during World War II and the other depicting him as the 34th President of the United States from 1953 to 1961.

Silver.com will randomly select the $1 Silver US Mint Commemorative Coins you receive from this product listing. We cannot guarantee you a date mark or corresponding design. These coins come from various US Mint facilities, including all four modern mint locations.