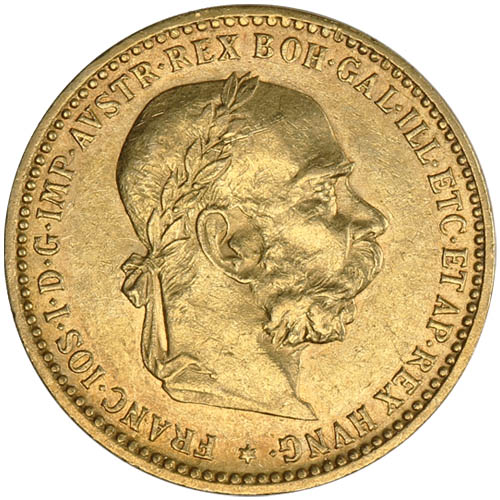 The Austrian Empire controlled vast stretches of southern and central Europe for more than a century, evolving from a singular region to become a multinational empire that was the third most populous in Europe at the time. The Corona Gold Austrian Coin was a popular issue from the empire in the late 19th century and samples are still available to this day for those who buy gold. Today, 10 Corona Gold Austrian Coins are available to you at Silver.com from random years.

From the beginning of the 19th century to the end of World War I, the Austrian Empire was a growing force on the European continent that would come to control much of south-central Europe. The nation began as the Austrian Empire carved from the lands of the Habsburgs and would eventually take over Hungary and other small neighbors.

All 10 Corona Gold Austrian Coins in this listing have an About Uncirculated condition. Coins in this condition equate to a score roughly between 50 and 58 on the Sheldon Numeric Scale for grading coins, though these coins have no official certified grade. AU coins have only slight signs of wear and the highest features of the design elements.

Silver.com offers these 10 Corona Gold Austrian Coins as a random-year issue. You will receive a coin with random date marks based upon availability in our warehouse at the time your order is fulfilled for shipping. When ordering multiples through this listing, please be aware that you may receive several coins with the same date mark.

The obverse of 10 Corona Gold Austrian Coins bears a right-profile bust of Emperor Franz Joseph I. A leader by the young age of 18, Franz Joseph I ruled the Austrian Empire from 1848 until his death and 1916, and for much of that time was also the King of Hungary during the period of the Austro-Hungarian Empire.