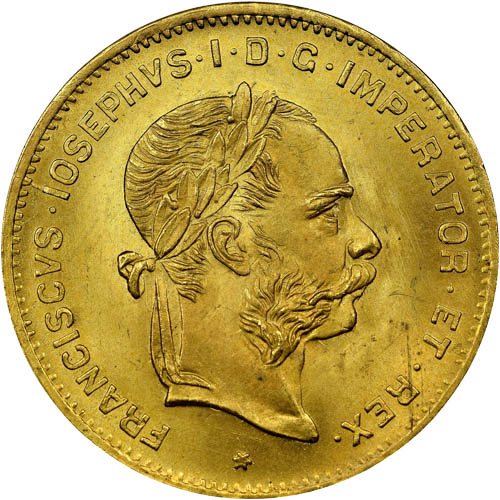 Among the most circulated gold coin designs of the 19th century was the 10 Francs-4 Florin coin from the Austrian Mint. When the Austro-Hungarian Empire joined the Latin Monetary Union in 1870, it began to issue two dual-value gold coins to bring its coinage up to the gold standard of the LMU. Right now, 10 Francs-4 Florin Gold Austrian Coins are available to purchase online at Silver.com.

Each 10 Francs-4 Florin Gold Austrian Coin is available in average circulated condition. This indicates the coins are in very good condition overall, though you may notice minor production flaws or other light wear and tear. The coins all ship inside of protective plastic flips. These gold coins have 90% gold content with copper used as the balance metal in the metallic alloy.

The Austrian Mint first issued the 10 Francs-4 Florin Gold coin as a trade coin when it joined the Latin Monetary Union in 1870. The empire issued the coins with a 10 Francs value for use in trade within greater Europe, while also marking a face value in the Florin denomination used within the Austro-Hungarian Empire. The coins were produced until 1892 and reintroduced in the 1970s by the modern Austrian Mint as a restrike, gold bullion coin.

The obverse of the 10 Francs-4 Florin Gold Austrian Coins comes with a right-profile portrait of Emperor Franz Joseph I. The Emperor of Austria from 1848, he became a dual monarch in the 1860s when the Kingdom of Hungary was absorbed into the empire, crowning Joseph I as the King of Hungary as well as the Emperor of Austria. He reigned for a total of 68 years, giving him the third-longest reign of any modern European monarch.

On the reverse of 10 Francs-4 Florin Gold Austrian Coins, you will find the crowned arms of the empire. The Austro-Hungarian Empire used a crowned, double-headed eagle with a sword in one talon and a globe scepter in the other hand. The Habsburg Dynasty used the same double-headed eagle on its coat of arms, and as the rulers of the Austro-Hungarian Empire, used that same image in its empirical emblem.

If you have any questions about these gold coins for sale, please feel free to ask. Our customer service team at Silver.com is available on the phone at 888-989-7223, online using our live chat, and through our email address.