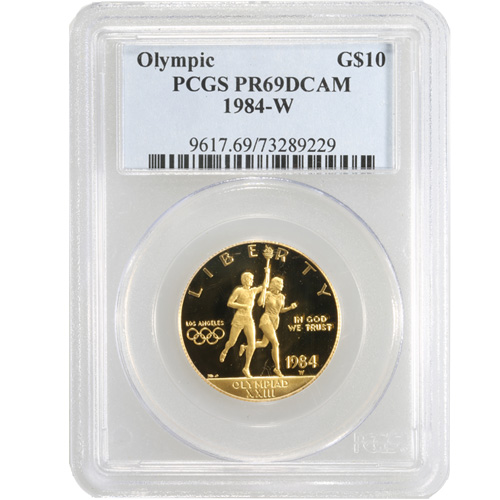 Gold commemorative coins from the United States Mint are issued to represent special moments, historical occurrences, or individuals from American history. The coins are produced only once in a variety of collections, with the resumption of American commemorative coining in 1982 introducing a new age of celebratory coins. Now, $10 Gold US Mint Commemorative Coins are available to you for purchase online in near-perfect condition at Silver.com.

In 1982, the US Mint resumed coining of commemorative specimens with the issuance of a George Washington 250th Anniversary Half Dollar coin. Since then, silver, gold, and bimetallic commemorative coins have been issued in nearly every year to mark special occasions, events, and honor individuals.

The obverse and reverse design elements of the $10 Gold US Mint Commemorative Coins include the depiction of various individuals or events. One of the most common examples of a commemorative US Mint coin with a $10 face value are the 1984 Olympic Games coins that feature varying obverse designs with the heraldic eagle on the reverse.

These $10 Gold US Mint Commemorative Coins come with a PR69 certification. Coins in this condition showcase full, original mint luster and have a maximum of two minor detracting flaws. Examples of acceptable flaws include only minuscule contact marks or hairlines located outside of the primary focal points of the coin.

Please remember that this is a random year, varied label issue at Silver.com. We cannot guarantee which grading house certified your coin, whether or not it will have additional labels such as UCAM or DCAM, nor guarantee which date mark and design will feature on the obverse and reverse fields. If you buy more than one, you may get several coins with the same designs, dates, and additional labels.

Silver.com customer service is available to you on the phone at 888-989-7223. You can also send us your questions about gold for sale via our live chat and email address features.