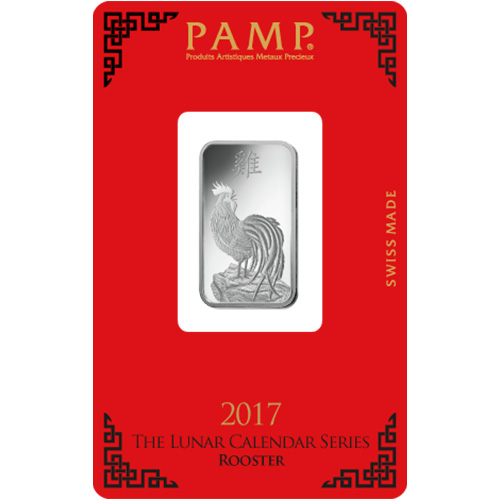 If you buy silver bars online, PAMP Suisse is probably one of the first refineries you turn to for beautiful creations. The Lunar Collection from PAMP is distinctive in its own right for a series of 12 different designs to match the animals of the Zodiac, but among those, the Year of the Pig issue is particularly unique. Right now, 10 Gram Silver PAMP Suisse Lunar Rooster Bars are available to purchase online at Silver.com.

Each of the 10 Gram Silver PAMP Suisse Lunar Rooster Bars is individually housed inside of protective packaging. PAMP Suisse houses the bars inside of protective plastic that is sealed around the edges by the included red Assay card. The card has the bar’s weight, purity, metal content, and serial number printed on it, as well as the signature of the certified assayer.

The Year of the Rooster is the tenth animal in the 12-year cycle of the Chinese lunar calendar. The rooster arrived 10th to the meeting called by the Jade Emperor. Those born under the sign of the rooster are practical, observant, resourceful, and analytical. If you’re looking for truth and honesty, seek out the rooster!

On the obverse of 10 Gram Silver Lunar Rooster Bars is the image of a rooster as it stands at the edge of a cliff. The edge of the rockface is on the left of the design field and the rooster looks back over its body to the right. The lone engraving is that of the Chinese symbol for the rooster.

The reverse of 10 Gram Silver PAMP Suisse Lunar Rooster Bars includes a similar image. A mirror opposite, this image captures the same design element from off the edge of the rocks looking back. As such, you see the rock cliff on the right of the design with the rooster looking back over its body to the left of the design field.

This bar is a unique departure from design elements previously used in the collection. Bars issued from 2012-2016 on the lunar calendar featured a single animal in front of a pole or tree, with one side offering a frontal view while the other captured the same scene from behind. This bar uses a mirrored image approach and is different from both its predecessors and successors.