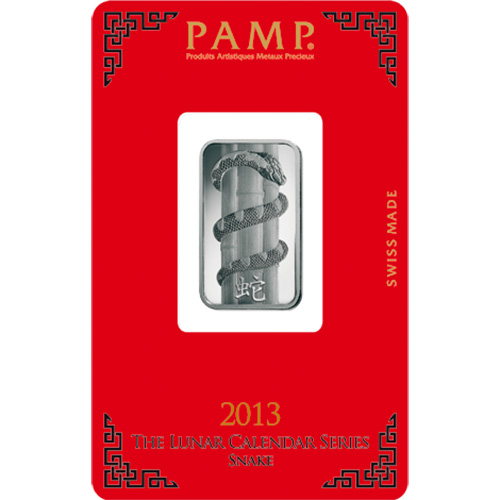 The story behind how the 12 animals in the Zodiac came to hold the positions they do in the Chinese Lunar Calendar is unique and can vary based on the individual telling the story. In most versions of the story, the dragon and snake share a distinct connection the others do not. Following the Year of the Dragon, Year of the Snake Silver Bars arrived from PAMP Suisse. The 10 Gram Silver PAMP Suisse Lunar Snake Bar is currently available to you for purchase online at Silver.com.

Well, it is believed that the Jade Emperor called on a select group of animals to meet him at the Heavenly Gates and serve as his personal guardians. The dragon and his son were invited, but when the dragon showed up fifth his son was not with him. When the snake arrived, he told the Emperor that the dragon was like an adoptive father to him and was given the sixth spot originally intended for the dragon’s son.

On the obverse of 10 Gram Silver PAMP Suisse Lunar Snake Bars is the image of a snake as it wraps its scaly body around a bamboo pole. The beast’s forked tongue sticks out slightly from its mouth and there is an engraving of the Chinese symbol for a snake.

The reverse of 10 Gram Silver Lunar Snake Bars includes the same visuals as depicted from behind. The bamboo pole is still visible in the center with the snake wrapped around it, but you can no longer see much of the snake’s head or face, but rather, can see its tail. Engravings include the PAMP Suisse logo, weight, metal content, and purity of the bar, and the serial number.

These 10 Gram Silver PAMP Suisse Lunar Snake Bars are available to you inside of individual protective plastic packaging sealed by a CertiPAMP Assay card. The red Assay card includes the weight, purity, metal content, and serial number for the bar, along with the signature of a certified assayer.

We encourage Silver.com customers to call us with questions at 888-989-7223 when buying silver. You can also connect with us online through our live chat and email address features.