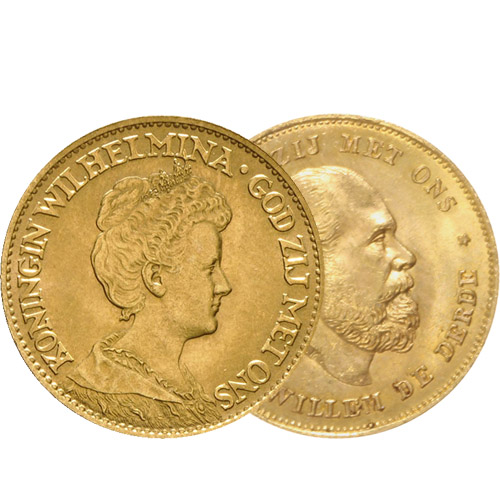 Like many other gold coins for sale from various years of issue, the designs on the obverse of the coin can vary significantly. The most common obverse designs on the 10 Guilders Gold Coin is the portrait of Queen Wilhelmina. She was Queen of the Netherlands from 1890 until 1948 when she abdicated to her daughter Juliana.

With a reign that lasted for 58 years, Queen Wilhelmina was the longest-reigning Dutch monarch. Her reign included World War I and World War II, the latter of which forced her to rule in exile in Canada. The Dutch economic crises of 1933 led to the final year of issue for gold guilders, including the 10 Guilders Gold Coin.

Even within the reign of Queen Wilhelmina, you could find greater variety in the obverse design. There were four portraits used throughout her 58-year reign. All of the 10 Guilders Gold Coins available here are in circulated condition, indicating the presence of wear and tear from the handling of the coins in circulation.

The reverse face of all 10 Guilders Gold Coins includes the crowned Royal Arms for the Kingdom of the Netherlands. Engravings on both sides of the coin are in Dutch, with the face value and year of issue featured on this reverse side of the coin.

We encourage Silver.com customers to reach out to us with questions at 888-989-7223. You can connect with us online through our live chat feature and email address.