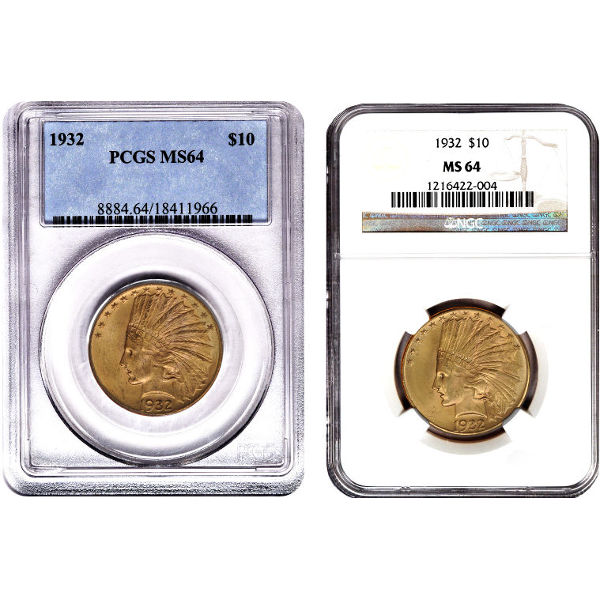 Customers: Please take note that these coins will be certified by either the PCGS OR NGC and graded as MS64 condition. We will select coins from years ranging from 1907-1933 to fulfill your order based on our current inventory selection.

The $10 Indian Head Gold Eagle coin was produced by the United States Mint from 1907 to 1933. It was the result of a campaign launched by President Theodore Roosevelt to revise the present artwork seen on US currency. This stunning coin enjoyed nearly three decades of circulation until, coincidentally enough, President Franklin Roosevelt ordered the cessation of gold currency. Consequently, all remaining gold coins had to be turned over to the US treasury for melting. Still, the few remaining $10 Indian Gold Eagle Coins that managed to escape this fate have become rather valuable among both collectors and investors.

Every $10 coin contains a gold content of .48375 troy ounces. Those featured in this particular series have been officially assessed with a grade of MS64 by either the NGC (Numismatic Guaranty Corporation) or the PCGS (Professional Coin Grading Service). MS64 coins are distinguished by an above average appearance despite the presence of minor scuffs and contact marks. To ensure their protection, each coin has been kept sealed in its original examination slab provided by the PCGS or NGC.

The artwork seen on the $10 Indian Gold Eagle coin was created by artist Augustus Saint-Gaudens, who attempted to shift the classical aesthetic to a more modern one. For instance, on the obverse of the coin, Saint-Gaudens has replaced Lady Liberty’s traditional coronet with a Native American war bonnet. He has also repositioned the thirteen stars from a circle into an arched heading for a more contemporary design. However, the mintage year of the coin remains in its same position beneath the portrait.

Saint-Gauden’s attempts to move away from tradition are also evident on the reverse of the coin. Instead of the traditional heraldic eagle, which mimics a coat of arms, he provides a more realistic portrayal of our national bird, which is vigilantly perched on a pile of arrows entwined with an olive branch. Inscribed on opposing sides of the eagle are the slogans “In God We Trust” and “E Pluribus Unum.”

As the last coin in the US Mint’s memorable gold eagle coin series, the $10 Indian Gold Eagle Coin is certain to be an impressive addition to any collection. To learn more about this coin, give us a call at 888-989-7223. Our staff can also be reached through live chat or by filling out the online form located on our contact page. 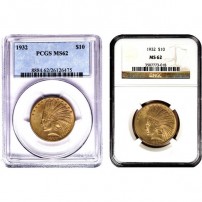 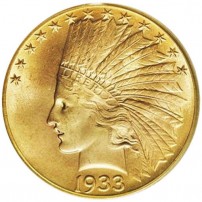 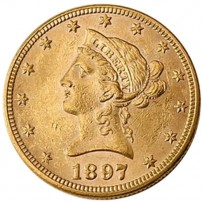 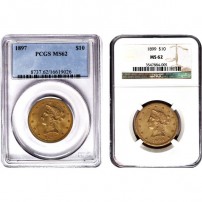