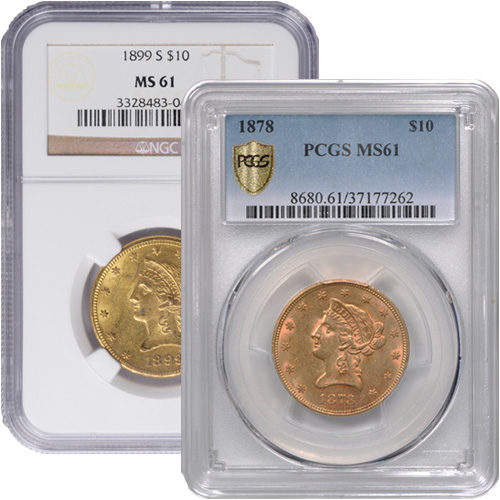 Before the United States Mint referred to its coins strictly by face values in US dollars (USD), its coinage was referred to using a base unit of denomination known as eagle. Reserved specifically for use with gold coinage, this designation for original values was established with the Coinage Act of 1792 and used through 1933. The Pre-33 $10 Liberty Gold Eagle Coin is one such example, and is now available to you online at Silver.com.

These Pre-33 $10 Liberty Gold Eagle Coins were designed by Christian Gobrecht, the second Chief Engraver of the United States Mint who assumed the position upon the death of Scot temporarily in 1823, and then assumed the role full time when Scot’s replacement, William Kneass suffered a debilitating stroke in August 1835.

On the obverse of Gobrecht’s Liberty Gold Eagle coin design is the left-profile portrait of Lady Liberty. She is depicted wearing a coronet on her head, the first change away from the Capped Bust imagery in US history. Included on this face were the image of Liberty, 13 stars, and the year of issue.

The reverse of all Pre-33 $10 Liberty Gold Eagle coins includes the heraldic eagle of the United States. Different than the modern version, it features the eagle with the nation’s heraldic shield on its chest, olive branches in one talon, and arrows in the other. Liberty Gold Eagles struck from 1838 to 1866 have no national motto on this face, while coins from 1866 to 1907 have a ribbon with “In God We Trust” below the eagle.

All coins in this listing are in Mint State 61 condition. Assigned an MS61 grade by the PCGS or NGC, these coins have diminished or noticeably impaired mint luster, clusters of large or small contact marks throughout, hairlines, scuff marks, and other small rim nicks or defects.

We encourage all Silver.com customers to contact us at 888-989-7223 with questions. You can also reach out to us online through our live chat and email features. Don’t forget, you can always find the price of gold and silver updated on our website throughout the day!