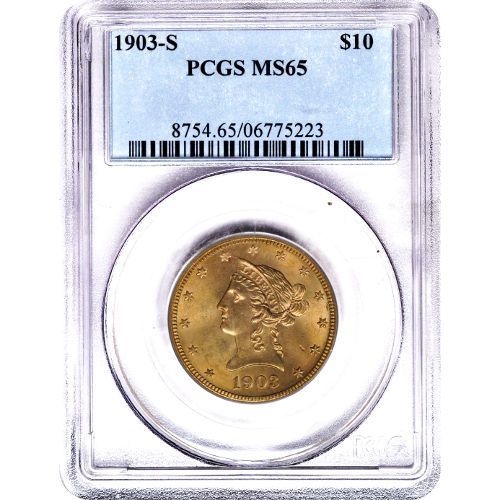 The Great Depression took an immense social, political, and financial toll on the United States, and the world as a whole. Among the lesser-known losses of the era were the nation’s Pre-1933 gold coins. Those coins that remain today are not rare as a result of their age, but because they survived an immense drive to collect and melt coins. Today, you have the chance to purchase a $10 Liberty Gold Eagle from Silver.com.

President Franklin D. Roosevelt ordered the collection and subsequent melting of all circulation gold coins beginning in 1933 in order to bolster the nation’s gold reserves. Among the few types of coins to survive was the $10 Liberty Gold Eagle coin.

These coins were originally produced in the late 1830s as a result of back-to-back gold rushes in the United States; the lesser-known rush in the Carolinas and Georgia, and the famous California Gold Rush. The first coins struck in a new series of gold coins from the US Mint included these $10 Liberty coins.

Christian Gobrecht designed the images featured on both sides of these coins. On the obverse is his image of Lady Liberty. The design features the word “Liberty” in her crown, 13 stars around her head, and the year of minting below. The obverse displays a heraldic eagle, complete with shield on its chest, and arrows and an olive branch in its talons.

Gobrecht’s designs were featured on various US coins of this period, including the $1, $2.50, and $5 Liberty coins as well. The United States Mint valued continuity in design, hence the use of Gobrecht’s images on multiple coins.

Each of these coins is available in a Mint State 65 grade. Coins in this condition still have a high quality luster, with a number of small contact marks possible on the surface. In some cases, coins have two larger blemishes or multiple hairlines visible instead.

If you have questions for a Silver.com associate, don’t hesitate to call us at 888-989-7223. We’re also available online through our live chat and email services. If you are looking for similar products, be sure to check out the $5 Liberty Gold Half Eagle MS64 and the $2.50 Liberty Gold Quarter Eagle MS63. 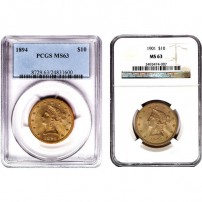