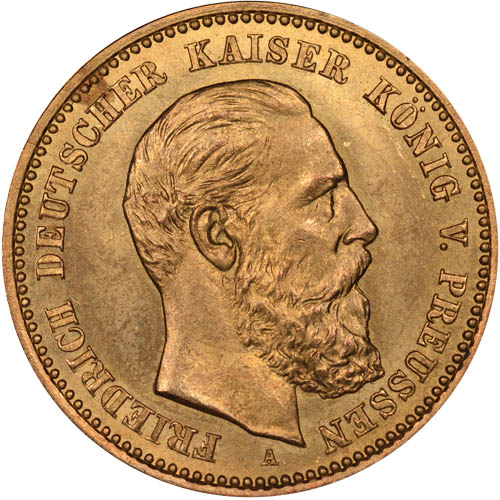 The German Goldmark was a popular gold coin issued throughout the German Empire from its formation in 1871 until its demise in 1918 at the conclusion of World War I. German gold coins were issued first by the German state of Prussia as early as 1872, with official German Goldmarks eventually becoming the only legal tender of the unified German states by 1876. Right now, 10 Mark Gold Coins are available to purchase online at Silver.com.

The 10 Mark Gold German Coins available in this product listing are shipped to you with a protective plastic package. The coins were issued, at first, by German states within the German Empire and later by the unified German Empire as the official gold legal tender coinage of the empire.

The German state of Prussia, long the wealthiest and largest of the states that unified into the German Empire, issued the first widely used gold coins. Prussian gold coinage was issued in 1872 with the ruling King of Prussia and Emperor of Germany on the obverse of the coins. From 1876 onward, the coins had the same design elements but were issued exclusively for the German Empire.

On the obverse of these 10 Mark Gold Coins from Germany are the effigies of reigning German monarchs from the era. The Emperor of Germany also held the title as King of Prussia during the imperial era. Wilhelm I ruled from 1871 until his death in 1888. His son Frederick III would rule for just 99 days in 1888 before his own death, with Wilhelm II taking over in 1888 and ruling until 1918 when he abdicated following German defeat in World War I.

The reverse side of the 10 Mark Gold German Coins includes the crowned coat of arms of the German Empire. The German Empire’s seal featured the German Eagle with the national crest on its chest and a crown of the emperor and King of Prussia above its head. Engravings typically read “Deutsches Reich,” or German Empire, and the face value along with a date mark.

If you have any questions, please feel free to reach out to Silver.com. Our customer service associates are available at 888-989-7223, chat with us live online, or email us directly with those inquiries.