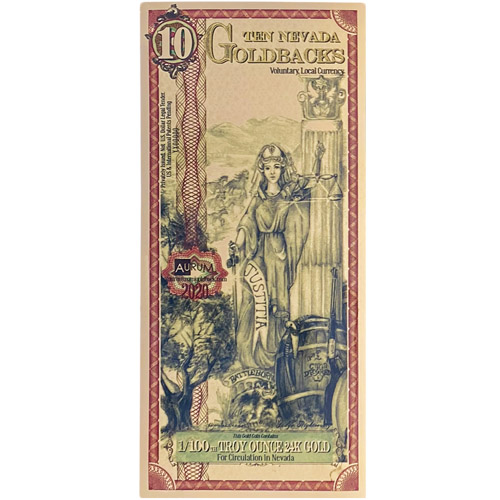 There’s a new form of gold for sale to investors that is becoming increasingly popular as gold prices move upward in the modern era. Opening up the world of gold ownership to those looking for affordable, flexible gold, Aurum Gold Notes are available in the smallest weights of gold bullion you can now own. Today, 10 Nevada Gold Goldback Notes are available to you online at Silver.com.

Depictions of Justitia date to the era of Roman mythology when she was known as the goddess of Justice. She was introduced during the reign of the emperor Augustus and is not only the older deities in the pantheon of Roman gods and goddesses. The first temple established in her name, the Temple of Iustitia (Justitia) was built in Roma and opened on January 8, 13 BCE. Though the emperor Tiberius opened the temple, many Roman emperors used her symbol as a virtue of justice to associate with their regime.

All of these 10 Nevada Gold Goldback Notes are available to you in brand-new condition and come with an individual plastic sleeve at shipping. The gold notes are produced with thin applications of gold in between layers of polyester and come with high-resolution graphics and text produced in full color on the surfaces of the gold notes.

On the obverse side of 10 Nevada Gold Goldback Notes, you will find the image of Justitia. With the mountains of northern Nevada in the background, Justitia stands holding scales overhead in her left hand while wielding a sword in her right hand. The field includes a small tree to the lower left and an oak barrel to the right with a repeating rifle, the weapon that won the West, leaning against it.

Two of the longest-used symbols associated with Justitia are the scales and the sword. The sword represented authority in the ancient world and eventually became associated with the idea that justice can be delivered swiftly and with finality. The scales weigh the value of opposing views in any case in the justice system. A younger symbol associated with Lady Justice is the blindfold. Meant to represent impartiality, blindfolds came into use in the 16th century.

Please don’t hesitate to reach out to Silver.com with any questions. Our team is available to assist you with questions at 888-989-7223, online through our live chat, and via our email address.